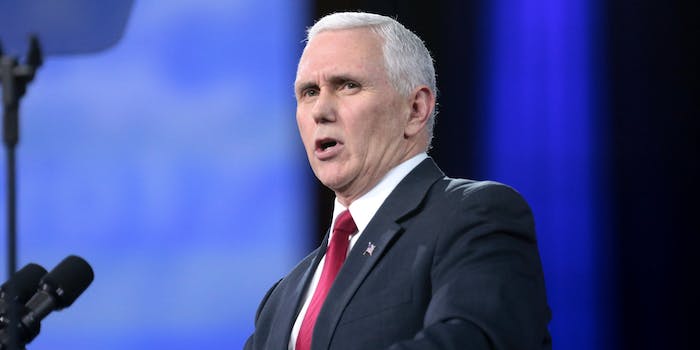 The draft appears to have been written in the event that the vice president tested positive.

Deadline inadvertently published a draft story on Thursday that was prepared in the event that Vice President Mike Pence tested positive for the coronavirus.

The article, which included the phrase “PREP. DO NOT PUBLISH UNTIL THE NEWS CROSSES” in the headline, was even sent out over Deadline’s social media channels.

The article immediately sent the internet into a frenzy, with countless users on Twitter suggesting that the article proved Pence had contracted the virus. It wasn’t long before “Deadline” became a trending topic.

The article came shortly after Pence had abruptly announced that he’d be returning to Washington D.C. after canceling all of his scheduled events in Indiana for Friday.

But Devin O’Malley, Pence’s press secretary, told reporters that the move was not due to a positive COVID-19 test from the vice president.

“Nobody’s sick. There’s no positive tests,” O’Malleye said. “The VP is planning on traveling on Saturday and Monday. We’ll have more information on the vice president’s schedule next week soon.”

Deadline eventually pulled down its social media posts, and the draft article itself.

The Daily Dot reached out to Deadline’s deputy managing editor Tom Tapp to inquire about the article but did not receive a reply.

“A draft post of a story about Vice President Mike Pence testing positive for coronavirus that was never meant to publish was accidentally posted on Deadline,” the outlet wrote. “It was pulled down immediately. It never should have been posted and Deadline will take steps to see this kind of thing never happens again.”

Deadline also apologized to Pence and its readers for the error.

Although a significant number of White House officials, including President Donald Trump, have tested positive for the coronavirus, no evidence indicates at this time that Pence has been infected.