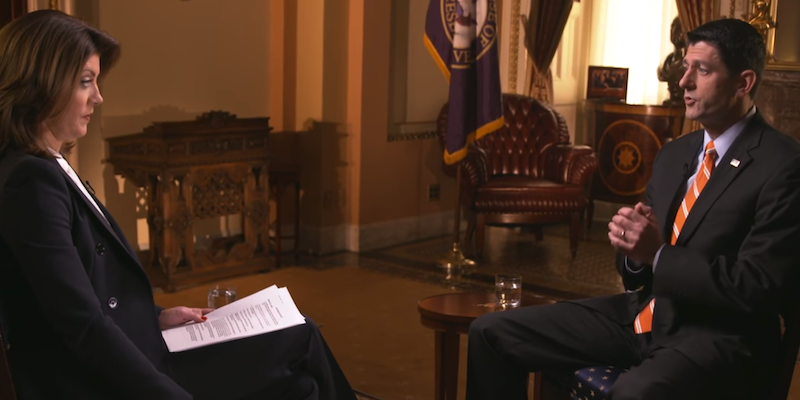 Speaker Ryan says he was aware all along that Nunes planned to brief President Trump.

Ryan, who was the first to be briefed by Nunes on March 22 about the intelligence intercepts, also said that Nunes believed the information was relevant to the House Intelligence Committee investigation—a statement that would appear to contradict what Nunes himself later told reporters that day.

The night before, Nunes had gone “off the grid” for a rendezvous on the White House grounds with an unidentified intelligence source, whom Nunes says wanted to show him a collection of classified reports that included details about “the Trump transition” and “meetings of [President Donald Trump] and senior advisors,” which Nunes said had been “distributed throughout the intelligence community.” The meeting was held at the White House, Nunes says, because it was a secure location with a computer system capable of accessing the executive-branch documents, which could not be accessed from Capitol Hill.

Nunes’ source, according to the New York Times, is reportedly two White House officials, both of whom work on intelligence issues for the Trump administration.

Nunes would later tell CNN that the meeting did not take place inside the White House itself, but on the complex grounds, likely indicating a visit to the Eisenhower Executive Office Building.

The next day, Nunes held a press conference in which he described the classified reports as depicting the “incidental collection” of Trump associates and, potentially, Trump himself. He was reluctant, however, to say whether the intercepts contained the personal communications of President Trump. “It’s possible,” he said. (Nunes would clarify the following day that he was “not sure” whether Trump or his associates were on phone conversations intercepted by the National Security Agency.)

“Incidental collection” describes the communications of Americans intercepted by the NSA as a byproduct of surveillance targeting foreign individuals. Such surveillance is authorized under Section 702 of the Foreign Intelligence Surveillance Act, and as Nunes was careful to note, the intercepts he described were likely obtained legally.

Nunes, adamant the reports did not vindicate the president, who had previously accused the Obama administration of “wiretapping” him, was primarily concerned that Trump associates were identified in the “widely disseminated” reports—or “unmasked”—since there is a protocol for concealing the names of Americans incidentally collected. Ostensibly, only if knowing a U.S. citizen’s identity is necessary to understanding the intelligence in context would their name be included.

During his CBS interview Thursday morning, Speaker Ryan said that Nunes’s had described the source who provided him access to the reports as a “whistleblower-type.” Twice he said that Nunes believed the information was relevant to the House Intelligence Committee investigation, the scope of which extends from the hacking of Democratic Party members—attributed by U.S. intelligence agencies to Russia—to possible coordination last year between the Trump campaign and Russian government officials.

Ryan’s remarks would appear to contrast sharply with what Nunes’s told reporters on March 22, that, “None of this surveillance was related to Russia or the investigation of Russian activities or of the Trump team.” The disconnect may also speak to the shifting scope of the House investigation, which Democrats have trained on the potential ties between the Trump campaign and Russia, while Republicans are eager to focus on virtually anything else—from unauthorized leaks to reporters, to what Nunes’s has characterized as the unnecessary propagation of Trump associates’ identities in foreign intelligence reports.

Ryan’s office could not be reached. A spokesman for Nunes did not immediately respond to a request for comment.

After news broke that Nunes had first viewed the intercepts on the White House property, he became mired in a controversy that has yet to subside. Democrats and Republicans alike have called on Nunes to either recuse himself or call for a special committee to conduct the investigation instead. Nunes was, after all, a key member of Trump’s transition team, and helped vet key appointments to the White House cabinet. And prior to the election, he raised roughly $1.3 million for the Trump campaign in California. Creating distance between the existence of the intercepts and the Trump-Russia investigation became a top priority.

“This is something I had been working on for a very long time,” Nunes told CNN on Monday. “I was concerned about American’s identities being either not masked properly, or in fact being unmasked in intelligence reports.” Nunes reiterated that the reports—which Ryan later described as “valuable” to the investigation—had “nothing to do with the Russia investigation.”