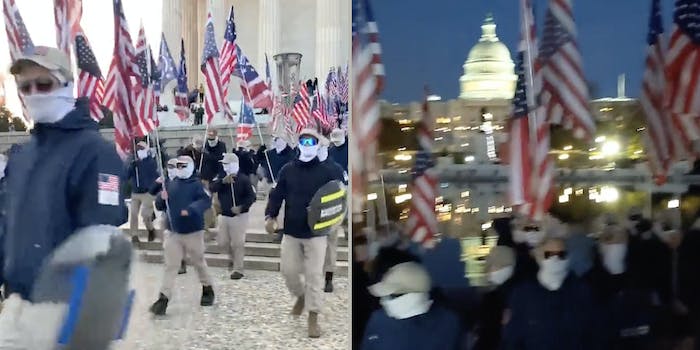 Conservatives online tried claiming the march was an 'antifa' front.

A group of white supremacists staged a rally in Washington, D.C. on Saturday while chanting “reclaim America,” according to numerous social media posts.

Videos show members of Patriot Front marching through the National Mall holding American flags and riot shields. Most donned white face coverings and sunglasses. No official estimates have been made, but several accounts say over 100 demonstrators were present.

Patriot Front leader Thomas Rousseau told the Daily Beast that the group represents the interests of America’s “true people.” The group was formed in the aftermath of the 2017 “Unite the Right” rally in Charlottesville, Virginia and has staged many protests since.

“Our demonstrations are an exhibition of our unified capability to organize, to show our strength,” Rousseau told the Daily Beast.

Footage from Saturday shows police officers walking and biking parallel to the protestors. No arrests were made, the Daily Beast reported.

At the end of the demonstration, which lasted into the evening, Patriot Front members marched across the Arlington Memorial Bridge towards Virginia. There, they awaited their ride home—which was a singular U-Haul. Dozens of demonstrators waited as the moving van made multiple trips, the Daily Beast reported. Police officers seemed to be helping the protestors leave, according to social media reports.

The rally was widely discussed on social media. The term “Reclaim America” was trending on Twitter, alongside “Antifa” and “Feds.”

Many conservatives claimed the demonstration was a false front staged by federal operatives, the Lincoln Project, or Antifa. There is no evidence to support these statements.

Critics of the protest drew parallels to the Ku Klux Klan. Others questioned the police presence, saying police were “escorting” protestors.

ProPublica called Patriot Front “the most active white supremacist group in the nation” in its 2019 exposé of the organization.