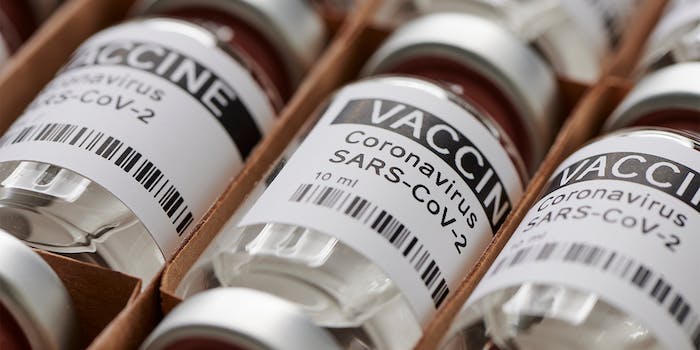 It's quite the dilemma.

As doctors began inoculating people with the COVID-19 vaccine in the United States on Monday, Parler users weren’t sure whether to praise President Donald Trump or peddle conspiracies.

Parler, a free speech social media messaging board adopted by the far-right, is a place for both Trump supporters and disinformation peddlers, which go hand-in-hand. Throughout the pandemic, vaccine conspiracies have spread like wildfire on sites like Parler. But now, as Trump boasts of the vaccine as a personal accomplishment, followers don’t know how to feel.

It highlights the difficult, confounding tightrope Trump fans have to walk, believing the virus to both be a hoax but also be proud of the president for his supposed tireless work in shepherding through a cure.

Vaccine conspiracies on the site come in many forms. Some allege the Chinese government has somehow poisoned the vaccine stock. Others say the vaccine is made from aborted babies. None of those are true.

The available COVID-19 vaccines are made up of messenger RNA which gives cells the ability to make harmless protein found in the coronavirus in order to build immunity, according to Mayo Clinic. The mRNA is made in a lab, not from aborted babies.

You won’t find that kind of analysis on Parler, though.

“Good information from The Charlotte Lozier Institute about new COVID vaccines. Good news is that most including Pfizer and Moderna were produced without stem cells from aborted babies,” one person posted.

Some Parler users continue to believe that the coronavirus is a form of common cold or flu, a lie fact-checked by the Center for Disease Control. Meanwhile, one account called the Freedom Authority has been undermining the vaccine by calling into question the amount of time it took to create.

“The common cold still has no vaccine, aids still has no cure after all these years and finances, cancer has had billions in research and still no answer. All that being said, we are supposed to trust a vaccine that has been tested for less than a year, for a virus people still no nothing about. Will you vaccinate? Discuss below,” another account said.

This post has some validity as typical vaccines take years to develop. But due to the severity of the COVID-19 pandemic, bureaucratic processes were cut in order to speed up the process. For example, the Food and Drug Administration signed emergency approvals for the vaccine and sped up review processes.

Other staples of conspiracy on the site surround billionaire Bill Gates and his involvement in the vaccine. The Bill & Melinda Gates Foundation poured millions into vaccine research.

The Gates-COVID-19 conspiracies started at the beginning of the pandemic as anti-vaxers believed Gates to be behind COVID-19 as a way to put microchips into people who receive the vaccine in order to track the American people.

“Bill Gates is in bed with the CCP and a major contributor to all of the problems the United States is experiencing now,” another user posted.

“#billgates can’t help but continue to fear-monger about #covid19 in order to push the #vaccine,” someone else said.

Users haven’t been able to square the circle of why Trump would be in on that plan as well.

The FDA issued emergency approval of the Pfizer vaccine on Friday and vaccination in the states began Monday. Pfizer is the first biotech company to produce a viable vaccine. The Trump administration bought 100 million doses from the company which will go to 50 million Americans.

Many Parler users are praising the president for the deployment of the vaccine. Some hashtags call Pfizer’s vaccine the Trump vaccine.

“THANK YOU PRESIDENT #TRUMP !!! For cutting the red tape and getting this #vaccine out ASAP. We love you,” another user said.

“The Mass Distribution of Covid-19 Vaccines Is Under Way. Months ahead of so-called health experts expectations,” someone else said.

Moderna, which produced another vaccine, is expected to achieve FDA approval within the next week. This would provide the U.S. with another 100 million doses.

In the next month, vaccinations will continue in the U.S. for those who want it. Trump supporters on Parler, meanwhile, will still be trying to figure out what side they are on.