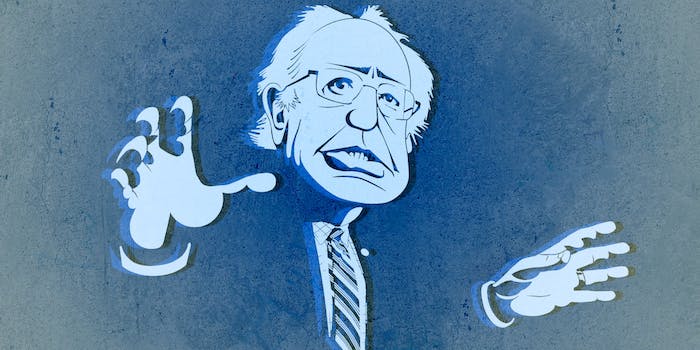 Sanders called Panama 'a world leader' in helping rich Americans hide their money from the IRS.

As politicians around the world brace for more revelations from the Panama Papers—a gigantic trove of leaked documents from the detailing the widespread use of tax-evading shell corporations in the Central American nation—one U.S. presidential hopeful might be thinking, “I told you so.” Bernie Sanders has been sounding the alarm about the issue for years.

The Vermont senator and 2016 presidential candidate railed against a pending trade agreement between the United States and Panama in a fiery speech on the Senate floor in 2011. Sanders said he worried that the free-trade deal would make it even more difficult for law-enforcement officials to crack down on tax havens in set up in Panama by corporations and wealthy individuals.

“I’m going to say a word about a Panama Free Trade Agreement,” he began. “Panama is a very small country. Its entire annual economic output is only $26.7 billion a year—or two tenths of one percent of the American economy. No one is going to legitimately stand up here and say that trading with such a small country is going to significantly increase American jobs. Then why would we be considering a trade agreement with Panama? What’s going on there?”

“Panama is a world leader when it comes to allowing wealthy Americans and large corporations to evade U.S. taxes by stashing their cash in offshore tax havens,” Sanders continued. “The Panama Free Trade Agreement would make this bad situation much worse. I’m a member of the Budget Committee … and we have heard testimony time and time again that our country is losing up to $100 billion every year as corporations stash their money in postal addresses in the Cayman Islands, Bermuda, and in Panama.”

Sanders said that the deal “would effectively bar the United States from cracking down on illegal and abusive offshore tax havens in Panama.”

“In fact,” he said, “combating tax haven abuse in Panama would be a violation of this free trade agreement, exposing the U.S. to fines from international authorities.”

The George W. Bush administration began negotiating the United States-Panama Trade Promotion Agreement in Bush’s second term, but passage stalled until the Obama administration revived it early in his first term. Obama signed it into law in 2011.

Despite the warnings of critics like Sanders, Obama’s entire Cabinet supported the deal—including then-Secretary of State Hillary Clinton, now Sanders’s rival for the Democratic presidential nomination.

The Panama Papers reveal that the Clinton-led State Department actively pushed for the deal, despite being aware that it would make tax avoidance in the country more difficult to rectify.

As part of the negotiations around the deal, the Treasury Department entered into a separate agreement with Panama intended to facilitate the sharing of tax information between the two nations. But as IRS Commissioner Doug Shulman noted, such information-sharing agreement generally aren’t enough to stop bad behavior.

“This is not to say that treaties and TIEAs are some sort of silver bullet; they have their shortcomings,” Schulman said during a 2010 talk at the Organization for Economic Cooperation and Development. “It often takes a long time to get the requested information from partners; and the information may also be incomplete. There are also very strict rules and you may have to jump through a lot of hoops to get the information you need.”

When the Panama Papers leaked, watchdog groups quickly pounced on what they saw as a vindication of their concerns about free-trade deals.

“Nearly five years after the U.S.-Panama Free Trade Agreement vote, the Panama Papers leak proves once again how entirely cynical and meaningless are the lavish promises made by American presidents and corporations about the economic benefits and policy reforms from trade agreements,” Lori Wallach, global trade watch director for Public Citizen, told Alternet.

“The top promise about the benefits of the U.S.-Panama FTA was that it would end Panama’s financial crime secrecy protections and tax havens and money laundering activities,” Wallach said, “but this leak shows that, if anything, Panama’s outrageous financial crime facilitation has intensified while the FTA’s investor protections and official U.S. stamp of approval has increased inflows of dirty money to Panama.”

Sanders has for decades made blanket opposition to free-trade agreements, from NAFTA to the Trans-Pacific Partnership, a key part of his democratic-socialist platform.

Clinton, meanwhile, has largely supported such deals, although she has become more skeptical in recent years.

Clinton was one of the TPP’s strongest backers while she ran the State Department, calling it the “gold standard” for trade deals. But she came out against its approval last year while campaigning for president.

Whether the Panama Papers will affect the presidential election remains to be seen, but the massive leak has already shaken up politics in Iceland. The country’s prime minister, Sigmundur Davíð Gunnlaugsson, stepped down from office on Tuesday following revelations that his family had stashed millions in secret Panamanian accounts.