There are no home servers to shut down, no leaders to arrest, no big websites for the FBI to triumphantly declare seized.

Following a wave of Dark Net arrests that brought down the famous anonymous drug market Silk Road 2.0, all eyes have turned to a marketplace called OpenBazaar that is designed to be untouchable.

OpenBazaar is the heir apparent to a lucrative empire of illicit, anonymous, online trading worth hundreds of millions of dollars at least. And if that’s not enough, it’s also meant to beat online shopping heavyweights like eBay and Alibaba by cutting the middleman out of online shopping entirely.

Seems it is OpenBazaar’s time to shine…

So distributed Dark Web black market platforms are about to become a big deal.

Described as the “next generation of uncensored trade” and a “safe untouchable marketplace,” OpenBazaar is fundamentally different from all the online black markets that have come before it, because it is completely decentralized. If authorities acted against OpenBazaar users, they could arrest individuals, but the network would survive.

“I want a free market online to exist unencumbered because that is going to result in personal freedom, personal liberty, wellbeing in perpetuity,” Sam Patterson, OpenBazaar’s operations lead, explained on a panel last night.

OpenBazaar is open-source software that runs a peer-to-peer network that can be used with the Tor anonymizing network. With no leader, each member of the Bazaar is equal, removing not just the fees associated with black markets but also the threat of scammers like the owners of the Sheep Marketplace, who stole as much as $100 million from customers and sellers.

“In order for the network to be decentralized without a slew of Amazon or eBay datacenters hosting a single application, we use peer-to-peer software similar to BitTorrent,” project lead Brian Hoffman told CoinTelegraph.

With OpenBazaar, everyone hosts their own store and connects—anonymously if they so choose—to a larger ecosystem, where they retain the kind of control they never had on markets like Silk Road. A businessperson will be able to sell, buy, auction, lend, crowdfund, arbitrate, and create all manner of new operations to work with the software.

Instead of relying on a highly targeted single leader like Silk Road’s notorious Dread Pirate Roberts, OpenBazaar allows users to choose the best third parties to arbitrate transactions. Tamper-proof and authenticated contracts (known as Ricardian contracts) are established between buyers and sellers so that third parties can audit and arbitrate every sale fairly and easily.

Instead of peacefully buying drugs online some people will have to go to the streets and rob and kill again. Temporarily though. #SilkRoad

“OpenBazaar has the lofty goal of creating a protocol and software that enables decentralized and open trade across the Internet,” Patterson wrote. “Most importantly Open Bazaar will serve as a means for facilitating easy, secure and private trade. The development strategy will be a multi-pronged approach that starts out modestly and expands as interest and participation increases.”

When the project was revealed to the world in April 2014, it quickly drew the attention of many black market aficionados. It began as a spinoff of an open-source project called DarkMarket, which was developed by Amir Taaki, who said he wanted to “equip the people with the tools needed for the next generation of digital black markets.”

While the decentralized market has shot back into the public eye due to the FBI’s recent anti-drug operations, OpenBazaar is not simply about drugs. Instead, it’s meant to be marketplace for all manner of goods. But there’s no denying the keen interest OpenBazaar has received from cyberspace’s biggest drug dealers since before it was even formally announced. 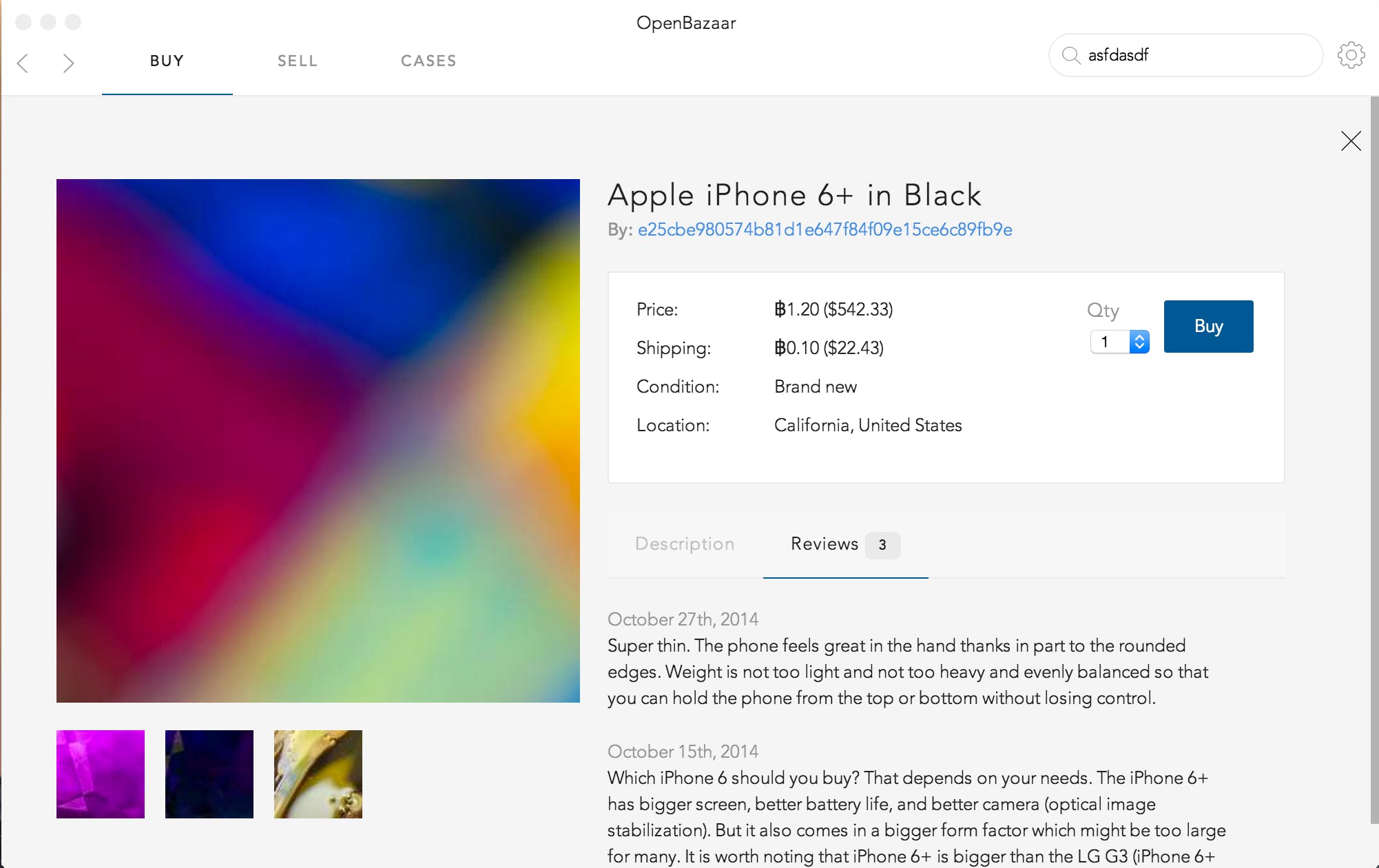 OpenBazaar, which has been funded entirely through donations so far, has a large and active team of developers volunteering for it, including Dionysis Zindros, a software engineer at Google who also works on security, architecture, and implementation at OpenBazaar.

The project is currently at beta version 2.3. Despite the considerable advancements made in the past six months, OpenBazaar is not ready for the spotlight quite yet.

It is also unsafe to use our software at this time for anything requiring critical privacy or anonymity. It is early beta software.

The OpenBazaar team has repeatedly reminded the world that “we don’t condone illegal activity,” but Patterson says the team is agnostic about what sort of products go up for sale on OpenBazaar since it’s censorship-resistant.

When it comes to illegal merchandise, Dark Net markets have made it obvious that there will be more than just drugs on sale.

“I think we face the same moral questions that the inventors of the Internet had, it’s the same internal struggle,” project lead Brian Hoffman said when asked about the inevitable arrival of illegal products like child pornography onto the network. “Should we build this because we know that maybe a fraction of the users are going to do something like that or should we avoid it? We all agree those things are flat out wrong but I don’t think that’s a good enough reason to say the other 99 percent of use cases that this could be supporting are just going to get thrown out because of this one bad apple.”

Instead, Hoffman said, the team is highly focused on a wide range of positive use cases that move OpenBazaar beyond products found on Silk Road and the Dark Net. In short, they want to steal eBay’s users by reducing costs and making online trade easier than ever.

The end of centralized marketplaces is nigh.

Patterson estimates a complete version of the software will ship around spring 2015.