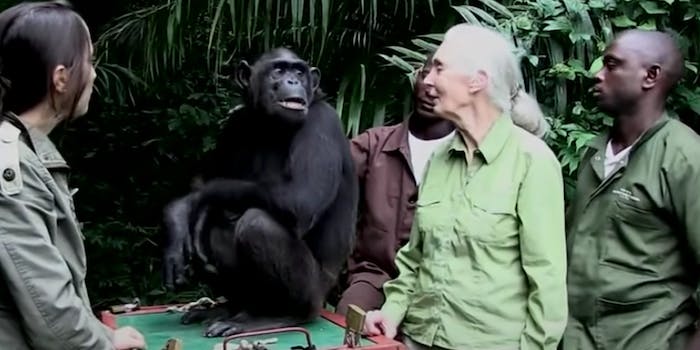 Beloved chimp advocate is the new enemy of conspiracy theorists

Obviously, the entire allegation is nonsense.

One Dumb Conspiracy is a weekly column that debunks the most wild conspiracy theories swirling around the web and runs on Mondays in the Daily Dot’s web_crawlr newsletter. If you want to get this column a day before we publish it, subscribe to web_crawlr, where you’ll get the daily scoop of internet culture delivered straight to your inbox.

Conspiracy theorists believe that Jane Goodall, the world renowned chimpanzee advocate, was somehow involved in the COVID-19 pandemic due to her remarks regarding population growth. Obviously, the entire allegation is nonsense.

The conspiracy theory was popularized on Instagram last week by conservative commentator David Harris Jr., who highlighted comments made by Goodall at the 2020 World Economic Forum (WEF) in Davos, Switzerland.

Goodall merely noted the increase in population and its effects on the planet but never once suggested the number of humans should be reduced. The conversation was centered around deforestation in the Amazon specifically.

“We cannot hide away from human population growth because, you know, it underlines so many other problems,” she said. “All these things we talk about wouldn’t be a problem if there was a size of population that was 500 years ago.”

In a caption on the video, Harris Jr. writes: “They’re not even hiding it any more… Just wait til you find out how many world leaders are a part of the wef…”

At the end of the clip, Harris Jr. also adds in his own commentary and suggests that Goodall’s remarks were foreshadowing the COVID-19 pandemic that would follow.

The video has since been viewed more than 512,500 times. The clip has also been inundated with comments from conspiracy theorists who share Harris Jr.’s view.

One of the most upvoted comments cited the Bible as proof that Goodall had sinister intentions.

The most common theme, however, was the allegation that all of the world’s woes, whether the pandemic or food shortages, were being caused by an evil cabal.

Given that Goodall never once calls for population reduction and that her comments had nothing to do with COVID-19, Facebook, which owns Instagram, has since placed a disclaimer on the post.

Of course, such disclaimers are unlikely to change the minds of those convinced that all of society’s ills are part of a secret plot to ruin their lives.

Such conspiracy theories highlight just how easily anyone’s comments can be taken out of context to fit a certain narrative.

Outrageous claims have become commonplace among not only high-profile political commentators but politicians as well.

Conspiracy theories now regularly go viral and unquestioned by many so long as they match one’s political views. Although methods and tools exist to verify the authenticity of such claims and data, conspiracy theories appear to be winning out in the battle for truth.