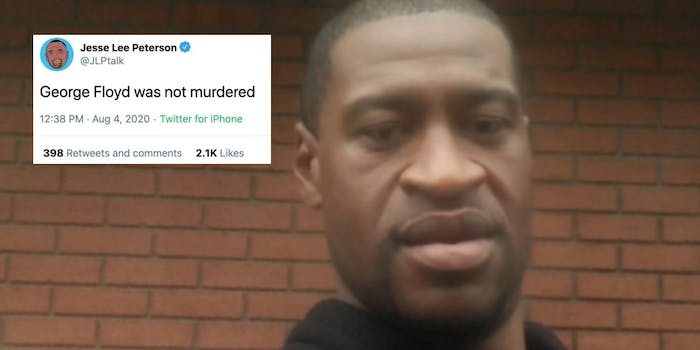 One popular commentator argued that Floyd 'was not murdered.'

Conservatives are reacting to leaked bodycam footage showing the moments prior to George Floyd’s death by suggesting that the video downplays concerns over the actions taken by Minneapolis police.

The footage, obtained and published by the Daily Mail on Monday, shows Floyd’s initial interaction with officers Thomas Lane and Alex Kueng on May 25.

Floyd repeatedly begs officers not to shoot him while expressing concerns about being placed in the back of a police SUV due to anxiety and claustrophobia.

The video eventually cuts out as Floyd is taken to the ground by officer Derek Chauvin, who knelt on Floyd’s neck for nearly 9 minutes.

While the footage provides context to what happened before Floyd’s death, it does not change the actions taken by Chauvin.

But some conservatives are convinced that the video has disproven that race was a factor in the incident or that Floyd was even killed, to begin with.

“New George Floyd footage shows America got hoodwinked by Democrats & their media again,” Tate tweeted. “$1Billion raised for #BlackLivesMatter & not a cent goes into the black communities they have destroyed. It all goes into the pockets of mostly white democrats.”

Tate wasn’t the only prominent conservative to comment on the footage.

Jesse Lee Peterson also weighed in, arguing that “George Floyd was not murdered.”

David J Harris Jr., another popular conservative, asked his more than half a million Twitter followers whether they believed Floyd was murdered or if the death merely followed “an unfortunate series of events.”

Right-wing broadcaster Bill Mitchell even shared an article from the notoriously inaccurate outlet the Gateway Pundit that argued Floyd killed himself.

The ever-controversial Candance Owens suggested that the footage had been withheld from the public as part of a conspiracy to aid Democrat lawmakers.

“Minnesota withheld the full #GeorgeFloyd body cam footage for one reason and one reason only: they knew it would immediately dispel the race narrative and they wanted to assist the Democrats in dividing Americans in an election year,” Owens tweeted. “Absolutely appalling. BLACK LIES MATTER.”

An investigation is currently underway to discover how the footage was leaked. Chauvin is still being charged with murder, while the other three officers on the scene have been charged with aiding and abetting murder.