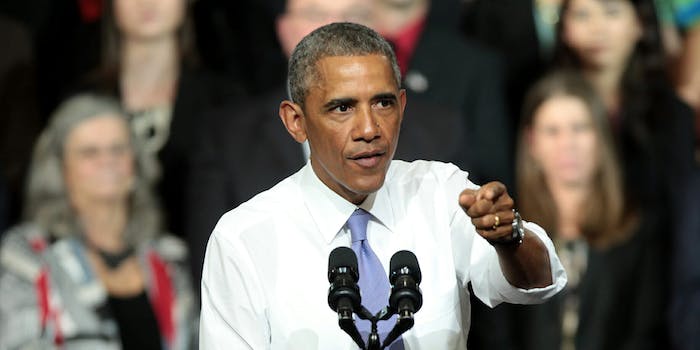 Obama calls out politicians for lying in public remarks

He didn't mention Trump by name, but his message was clear.

“Too much of politics today seems to reject the very concept of objective truth,” the former president said. “People just make stuff up. They just make stuff up. We see it in the growth of state-sponsored propaganda, we see it internet driven fabrications, we see it in the blurring of lines between news and entertainment. We see the utter loss of shame among political leaders where they are caught in a lie, and they just double down and they lie some more.”

“Politicians have always lied, but it used to be if you caught them lying, they’d be like ‘aw man.’ Now they just keep on lying.”

Former President Obama: “We see the utter loss of shame among political leaders where they’re caught in a lie and they just double-down and they lie some more.” pic.twitter.com/EOazEOIq9C

The former president also addressed nationalism and xenophobia, according to CNN. Obama blasted the rise of such political movements across the country.

“The politics of fear and resentment and retrenchment began to appear. And that kind of politics is now on the move. It’s on the move at a pace that would have seemed unimaginable just a few years ago,” he said, according to the news outlet. “I am not being alarmist, I’m simply stating the facts. Look around—strongman politics are ascendant, suddenly, whereby elections and some pretense of democracy are (maintaining) the form of it, where those in powers seek to undermine every institution or norm that gives democracy meaning.”

Obama also warned that countries that “rely on” such ideas, “find themselves consumed by civil or external war.”

"The fact that countries which rely on rabid nationalism and xenophobia and doctrines of religious or racial superiority… Eventually those countries find themselves consumed by civil or external war," Obama says during keynote speech https://t.co/OR9B4ki2e9 pic.twitter.com/ZrFCagqSuN

“Check the history books,” he said. “The fact that technology cannot be put back in a bottle. So we’re stuck with the fact that we now live close together, and populations are going to be moving, and environmental challenges are not going to go away on their own. So the only way to effectively address problems like climate change, or mass migration, or pandemic disease, will be to develop systems for more international cooperation, not less.”