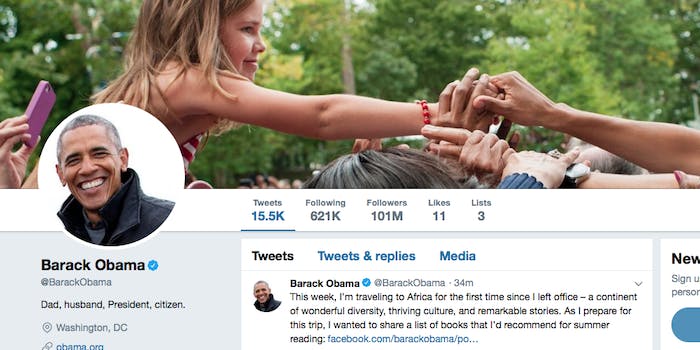 Why hasn't Trump's account seen such a massive dip?

In what is now being dubbed the “Twitter Purge,” a number of prominent Twitter users lost not just hundreds or thousands of followers, but millions.

Earlier this week, Twitter announced that it would begin changing how it displays follower counts in its app. Namely, it would remove “followers” that were actually unused, locked accounts. (When Twitter detects abnormal account behavior, it will lock an account and request the user authenticate it and reset their password. If this isn’t done, the account stays locked.)

In its blog post, Twitter said that most users would likely lose only about four followers. However, as we now know, accounts with far more followers have lost millions in this Twitter Purge.

Among the heavy hitters affected by the purge thus far: Justin Bieber, Katy Perry, and Barack Obama, who all lost more than 2 million followers apiece. By Friday morning, Perry had lost nearly 3 million.

The size of the follower loss was not directly proportional to the number of followers a Twitter user had. Donald Trump, curiously, has only lost around 300,000 followers so far—but compared to some of the other names mentioned, he had far fewer followers to begin with. Trump has just over 53 million total followers, while Barack Obama still has 101 million, for example.

Since March of this year, Twitter has been taking steps to make its social network “healthier,” including asking for the advice of experts. Since then, it has cracked down on bots and spam with a four-point plan, and it has gotten more aggressive in banning users for violating its guidelines. (However, the latter still seems to be enforced confusingly and haphazardly at times.)

While this latest move doesn’t do much of anything to improve the security and safety of the platform, it does help make it more reflective of reality. These locked accounts may follow others, but they’re not true Twitter users.