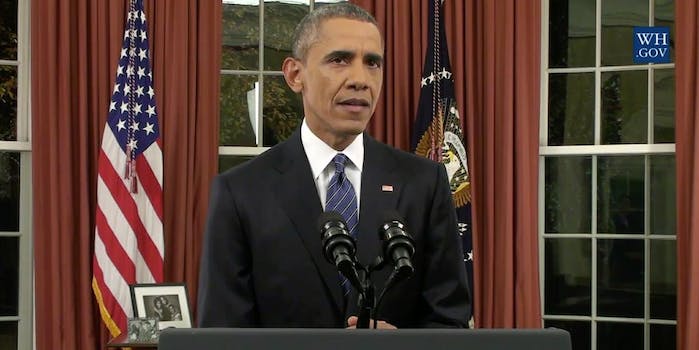 This marks the third time Obama addressed the nation from the Oval Office.

President Barack Obama on Sunday announced a strategy of fighting terrorism abroad and controlling access to guns at home in response to recent attacks that were carried out by Islamic extremists.

Obama’s remarks come amid the aftermath of two deadly mass shootings in the U.S., a terrorist massacre in Paris, and an increasingly contentious 2016 election season, as Republican candidates repudiate the president’s strategy in combating Islamic extremism at home and abroad while defending Americans’ Second Amendment rights to arm themselves against potential attackers.

“What could possibly be the argument in allowing a terrorist suspect to buy a weapon?”

Though the president acknowledged that law enforcement has not yet proven a direct link between the San Bernardino shootings and ISIS, Obama cited earlier attacks in Chattanooga and Fort Hood as evidence that the terrorist group’s ability to influence its supporters had dire consequences in the United States.

Obama also asked Congress to pass legislation that would authorize the use of military force, though he maintained that the U.S. would not use ground troops to fight the Islamic state, also known as ISIL and Daesh.

In the most explicit directive for federal lawmakers, Obama called on Congress to ban individuals on the U.S. government’s terrorism watch lists from being able to purchase weapons.

“The threat from terrorism is real, but we will overcome it,” Obama said. “We will destroy ISIL and any organization that tries to harm us.”

Obama’s Sunday night address called on lawmakers to close a loophole that allows those on the anti-terrorism no-fly list to purchase firearms. “What could possibly be the argument in allowing a terrorist suspect to buy a weapon?” Obama asked.

Due to a loophole in gun-check procedures, as many as 1 million individuals on the Transportation Security Administration’s “No-Fly List” and government terrorist watch lists can purchase guns. Obama called the gun-check loophole “insane” on Saturday, during his weekly radio address, and called on Congress to act. Previous attempts by Senate Democrats to repeal the gun-check loophole have failed. Earlier this month, the Senate killed a measure by Sen. Dianne Feinstein (D-Calif.) that would block people on the federal terrorism watch list from purchasing guns by a vote of 45-54.

The Government Accountability Office first reported in 2010 that 1,119 transactions of firearms or explosives by individuals on the FBI’s terrorist watch list were successful, out of a total of 1,228 transactions. Individuals underwent background checks in such cases. Under current federal law, appearing on the FBI’s terrorist watch list does not automatically bar an individual from purchasing a gun unless there is proof of a felony conviction or illegal-immigrant status.

In a blunt display of priorities, Republicans have came out in opposition to fixing the no-fly list gun-check loophole. Republican presidential candidate and Florida Sen. Marco Rubio recently argued that expanded background checks would not have kept San Bernardino shooters Syed Rizwan Farook, 28, and Tashfeen Malik, 27, from accessing guns. Neither Farook nor Malik appeared on any  U.S. terrorism watch lists. Rubio on Sunday listed the high number of “false positives” on the no-fly list as well as the possibility that closing the loophole might further slow down gun purchases as reasons his opposition to reform.

“The majority of the people on the no-fly list are often times people that just basically have the same name as somebody else who doesn’t belong on the No Fly List,” Rubio said on CNN’s State of the Union. “Former Senator Ted Kennedy once said he was on a no-fly list. There are journalists on the No Fly List. There are others involved in the No-Fly List that wind up there.”

“The threat from terrorism is real, but we will overcome it. We will destroy ISIL and any organization that tries to harm us.”

Obama’s remarks came on the heels of a mass shooting in San Bernardino on Dec. 2, during which 14 people were killed. Emerging evidence that Farook and Malik were radicalized ISIS sympathizers has put the San Bernardino incident in the unlikely intersection of two of the most contentious issues in Obama’s second term: gun control and how to address the growing threat of the Islamic State.

Obama said on Sunday evening that Farook and Malik had “gone down the dark path of radicalization” and embraced a “perverted version of Islam” that calls for a war against America and the West.

Obama said that terrorism has evolved into a new phase since 9/11, one in which terrorists turn to “less-complicated” acts of violence, such as ones that occurred in San Bernardino, Fort Hood, and Chattanooga shootings, which intelligence agencies have more difficulty in intercepting. He said that the Internet has “blurred the line” between countries, made it possible for ISIS to recruit supporters, and suggested that law enforcement and tech companies should work together to unmask encrypted communications.

Obama said the U.S. would continue to hunt down terrorist plotters in other nations and supported the efforts of France and the United Kingdom to weaken ISIS in Syria. New intelligence-sharing efforts with European allies and efforts to help Turkey, through which ISIS launders much of its profit-rich oil, seal its border with Syria have also began in response to recent ISIS attacks. The State Department will also study the “fiancé visa program,” officially known as a K-1 visa, that allowed Malik to immigrate to the United States from Pakistan.

Obama called on Muslim leaders to take a more aggressive approach in condemning acts of Islamic terrorism, but he also rejected proposals by Republican presidential candidates that called for increased scrutiny, including immigration controls, on Muslims in America.

In the aftermath of Obama’s Sunday remarks, Republicans criticized many of its aspects on Twitter.

Is that all there is? We need a new President – FAST!

#Obamaspeech was as believable as a hostage video. Pathetic response to the worst attack on US since 9/11

.@marcorubio: "Where is…widespread evidence that we have a problem in America w/ discrimination against Muslims?" pic.twitter.com/vIGMVJjJRG

House Speaker Paul Ryan (R-WI) called Obama’s address “disappointing.” In a statement released after the address, Ryan made mention of an upcoming vote on a bill to update the visa waiver program that was used by one of the San Bernardino shooters.