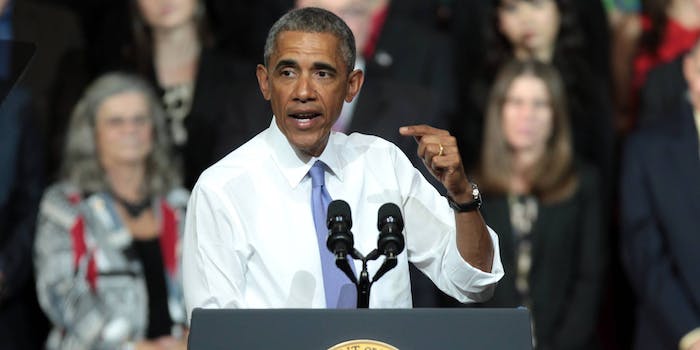 In the midst of President Barack Obama‘s keynote address on the penultimate night of the 2016 Democratic National Convention, a protester briefly interrupted his oration with a chant of “No on TPP.”

"No on TPP," chants heard during #Obama's speech to the DNC #DemsInPhilly #TPP https://t.co/2tZIteVU3w pic.twitter.com/06CACq5UwN

While Obama kept talking, refusing to even momentarily halt his speech slamming Republican presidential nominee Donald Trump, singing the praises of Democratic nominee Hillary Clinton, and attempting to sum up his eight years in the Oval Office, the outburst highlighted the divisions within the party over the controversial trade agreement.

The Trans-Pacific Partnership is a multilateral trade deal between a dozen Pacific Rim nations—from the U.S. and Chile to Japan and New Zealand.

Here’s the full text of the agreement, which was signed by all of the member countries last year but has not yet been approved for formal implementation by the U.S.

The TPP has been the subject of intense debate in the United States since the country entered into the formal negotiations that eventually led to the deal in 2008. The details of the agreement were hammered out by the trade representatives of all the member countries. Those negotiations were held behind closed doors, as is typical for most trade agreements, but the secrecy drew the ire of many anti-globalization activists—who came in skeptical about large-scale trade agreements, like NAFTA, which has been blamed for making it easier to outsource American manufacturing jobs.

While the Obama administration has labeled the TPP “the most progressive trade agreement in history,” many of the deal’s critics see it largely functioning as a giveaway to large multinational corporations.

As Tim Canova—a liberal law professor who is challenging recently ousted DNC Chairwoman Debbie Wasserman-Schultz for her seat in the House of Representatives—explained to the Daily Dot in a interview earlier this year, one of the points of contention many people have with the agreement is something called the investor-state dispute settlement provision. That section of the deal gives private companies the right to challenge U.S. laws on the grounds those laws have the potential to harm future profits.

While Clinton was initially a champion of the deal, she has since backed off and now opposes its passage—as do her current and former rivals on the campaign trail, Trump and Vermont Sen. Bernie Sanders, both of whom have made opposition to the TPP cornerstones of their respective campaigns.

Even so, many critics of the deal, and of Clinton as a presidential candidate, have speculated that the former first lady’s recent antagonism to the TPP won’t last. Earlier this week, long-time Clinton ally Virginia Gov. Terry McAuliffe said in an interview following his own convention speech that Clinton would likely tweak the deal after becoming president and then, once again, throw her weight behind its passage.

“I worry that if we don’t do TPP, at some point China’s going to break the rules—but Hillary understands this,” McAuliffe said. “Once the election’s over and we sit down on trade, people understand a couple things we want to fix on it, but, going forward, we’ve got to build a global economy.”

One of the reasons Sanders stayed in the race as long as he did was in order to gain more influence over the Democratic party’s platform—a document produced every four years outlining the party’s policy goals and priorities. Sanders got a handful of his picks onto the platform drafting committee, such as budding podcast star Rep. Keith Ellison and fierce Obama critic Dr. Cornell West.

However, the platform ultimately stayed ambiguous on whether to support the agreement.

“On the Trans-Pacific Partnership … there are a diversity of views in the party,” the document reads. “Many Democrats are on record stating that the agreement does not meet the standards set out in this platform; other Democrats have expressed support for the agreement. But all Democrats believe that any trade agreement must protect workers and the environment and not undermine access to critically-needed prescription drugs.”

That dissension, at least momentarily, broke through to the national stage when that protester interrupted President Obama.