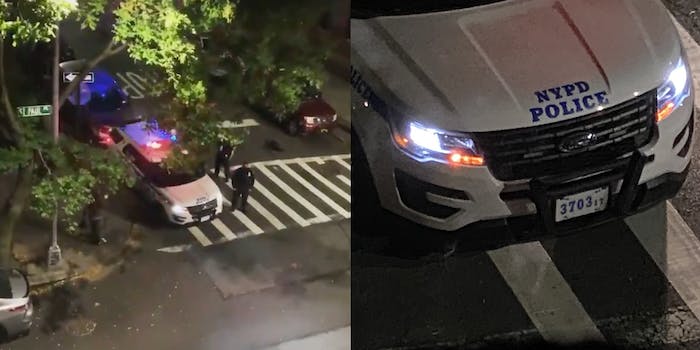 Endorsing political candidates while in uniform is against NYPD policy.

A verbal altercation between a pedestrian and several cops sitting in a patrol car that was blocking a crosswalk in Flatbush resulted in one of the officers allegedly flashing a white power hand symbol and yelling “Trump 2020” repeatedly through the vehicle’s loudspeaker.

At that point, the pedestrian began filming and challenged the officer to blast his support for Trump into the neighborhood yet again.

“Trump 2020,” the officer says over the loudspeaker.

“Go f*ck yourself, you f*cking fascist,” the man replies.

Additional footage shared by writer Brandon Hines shows a different angle of the incident, recorded from farther away and starting just as Jane’s video comes to an end.

The NYPD patrol guide explicitly states that “while on duty or in uniform, endorsing political candidates or publicly expressing personal views and opinions concerning the merits of…any political party or candidate for public office” is prohibited conduct.

The Twitter account for the NYPD issued a statement saying that it is aware of the videos and the incident is “under investigation by our Brooklyn South Investigation Unit.”

Terence Monahan, chief of department for the NYPD, chimed in that he believes “it is imperative to remain apolitical” while wearing a police uniform.

“Behavior like this will not be tolerated and will be dealt with,” he added. “An update will be provided to the public.”