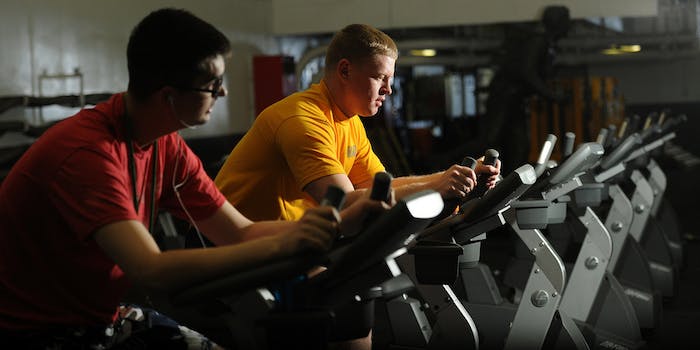 With the rise of fitness tracking wearables and apps, it’s never been easier for technology to make you feel absolutely terrible about yourself and your body. The latest entry in the body-shaming tech marketplace? Nudge, a “lifestyle tracking app” that, according to its press release, syncs up to your fitness tracking wearable of choice “and index[es] the information to create homogeneity among an increasingly varied market.” Translation: It exists for the sole purpose of making you feel like a fat, listless slob.

How does Nudge do this? Well, basically, here’s how it works: When you log into Nudge, the app asks you questions about your health and fitness habits, such as how many ounces of water you drink and how many minutes of exercise you get per day. It then assigns you a number between 1-110, or a “Nudge Factor,” that assesses how healthy your overall lifestyle is. (I got a six, which I’m assuming means I will drop dead of a stroke in approximately three minutes. Bye world, it’s been real!) Provided you still have a pulse upon calculating your Nudge Factor, you can sync up your personal wearable fitness tracking device to the app. Nudge is compatible with various fitness tracking platforms, so if you’re a cyclist who uses Fitbit, for example, you can compare your data to a swimmer who uses Jawbone. You can also join different “clubs” based on your athletic or fitness interests, so for instance, if you’re a runner, you can compare your fitness scores to those of other runners.

All of the user data from more than 120 countries is conveniently aggregated in the app’s dashboard. “Due to the fragmented nature of the health wearable marketplace, everyone’s wearing a different product,” Nudge cofounder Mac Gambill told me. “What Nudge does is help users manage and make sense of the data.”

All that sounds great from a big data perspective, and Gambill and cofounder Phil Beene plan on using their data to spearhead larger studies comparing the fitness habits of users in, say, Germany, to those in the United States. But the question still remains: Why would fitness tracker users actually want to compare their health and fitness habits to those of other users? Isn’t the whole point of maintaining a healthy lifestyle to make you feel better about yourself, rather than compare yourself to other people?

As evidenced by the fact that I scored a six on the Nudge Factor assessment, I am obviously not the target audience for this app, so I asked the founders this question. The purpose of the app, they told me, is essentially to motivate their users to get in better shape is by showing them how other, more fit people score on the same metrics, literally giving them a “nudge” in the direction toward a healthier lifestyle.

“There are some personality types who get a lot out of social support, motivation, and competition,” Beene told me. “Some people have a hard time being accountable for themselves, so they benefit from outside influence.” He gave the example of a mom and her 18-year-old daughter using Fitbits to motivate each other to exercise and do healthy activities together.

Of course, there are some personality types who would not benefit from such outside influence. In fact, if I saw my friends’ Nudge factors, I would likely become so despondent and ashamed of my unhealthy lifestyle that I’d just give up for good and spend the rest of my days eating entire pizzas in one sitting. So Nudge would probably make me less inclined to want to adopt healthier eating and exercise habits than I ever was in the first place.

If you fall into this category, Nudge also lets you opt out of the social sharing option—”Health is very personal to some people,” Gambill says—so you don’t necessarily have to see other people’s scores. But if you feel you’d benefit from getting that “nudge” (in this instance, “push” is probably more appropriate) toward adopting a healthier day-to-day lifestyle, then perhaps this is the fitness app for you.

Photo by Official US Navy Page/Flickr (CC BY 2.0)