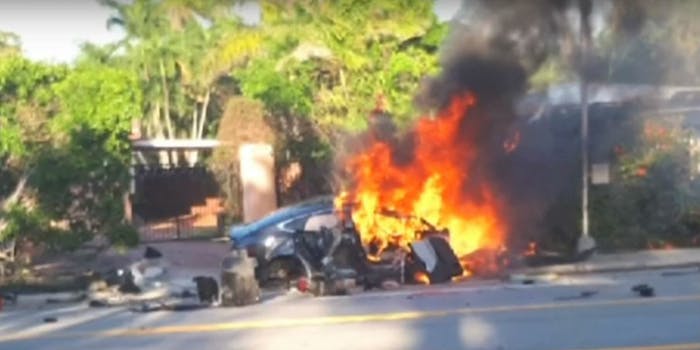 Tesla crash that killed 2 teenagers is under NTSB investigation

The NTSB is focusing on emergency response.

The National Transportation Safety Board (NTSB) is once again investigating an electric car crash involving a Tesla. This time, however, it does not expect the company’s “Autopilot” driver assistance mode was involved.

The fatal accident happened on Tuesday in Fort Lauderdale, Florida, when a gray 2014 Model S crashed into a concrete wall and burst into flames. Two 18-year-old high school students, Barrett Riley and Edgar Martinez, were trapped in the vehicle and pronounced dead at the scene. A third passenger was ejected from the car and transported to a nearby hospital where he is in fair condition.

The NTSB is focusing its efforts on the emergency response to the fire created by the car’s volatile lithium-ion battery, including “fire department activities and towing operations.”

Tesla said it was working with authorities in the investigation and noted a high-speed collision can cause a fire with any type of vehicle. Police say speed may have contributed to the crash but didn’t say how fast the car was going or what caused it.

“We have not yet been able to retrieve the logs from the vehicle, but everything we have seen thus far indicates a very high-speed collision and that Autopilot was not engaged,” a Tesla spokesman said in a statement.

This marks the fourth investigation the NTSB has conducted into accidents involving Tesla’s electric vehicles. In March, a Tesla Model X crashed into a highway barrier in Mountain View, California, killing its 38-year-old driver. The incident sparked questions about the safety of the Autopilot mode. Tesla said Autopilot was engaged leading up to the crash but the driver had their hands off the wheel for six seconds prior to impact.

Similarly, the first death in an “autonomous” vehicle occurred in 2016 when a Tesla failed to recognize the white side of a commercial tractor-trailer against a bright sky and drove underneath it, sheering the roof off and killing 40-year-old Joshua Brown. After a lengthy investigation, the NTSB released a 500-page report saying Brown kept his hands off the wheel for extended periods of time.

In its current state, the poorly named Autopilot is far from being a fully autonomous solution, which is why it alerts drivers when it detects inactivity. However, experts say it’s difficult for drivers to stay engaged when using driver assistance features that do most of the work for them.