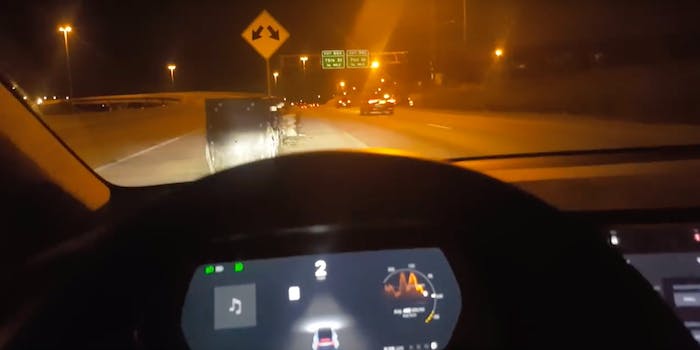 One driver wanted to set the record straight—and it was a close call.

Last month a Tesla Model X crashed into a highway barrier in Mountain View, California, killing its 38-year old driver. Autopilot, Tesla’s semi-autonomous driving feature, was on at the time of the accident. While some feel Autopilot may be at fault, statements from Tesla indicate the company believes the driver’s inaction led to the fatality. To better understand how the accident occurred (and whether it was a driver- or Autopilot-related error), a Tesla owner in Chicago decided to recreate that Autopilot accident himself.

While the Model S driver is unwisely holding his cellphone to record what happens, he does manage to recreate the fatal Mountain View Autopilot accident with nearly identical results.

Luckily, knowing what the outcome could be, this Chicago driver was able to put his hands back on the wheel and hit the brakes before colliding with the barrier.

The National Transportation Safety Board is investigating the Mountain View Autopilot accident. In a blog post, Tesla explained a number of details about both Autopilot and the situation surrounding the fatal incident.

“The driver had received several visual and one audible hands-on warning earlier in the drive and the driver’s hands were not detected on the wheel for six seconds prior to the collision,” Tesla wrote. “The driver had about five seconds and 150 meters of unobstructed view of the concrete divider with the crushed crash attenuator, but the vehicle logs show that no action was taken.”

Tesla said it’s working closely with investigators on the accident. The NTSB said that Tesla has been extremely cooperative with investigations into past Tesla incidents.