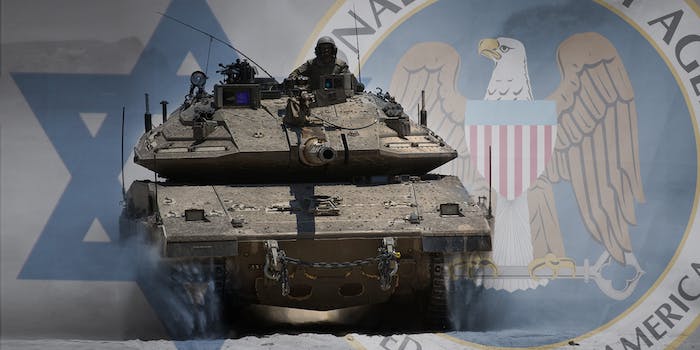 It goes beyond bombs and money.

The U.S. National Security Agency (NSA) has significantly increased its sharing of intelligence information with Israel over the past decade, according to classified documents leaked by whistleblower Edward Snowden.

The top-secret documents, revealed Monday in an article published on the Intercept website by journalist Glenn Greenwald, sheds new light on the relationship between the United States and Israel and exposes a complex reality behind U.S. leadership’s calls for Middle East peace.

The report follows the military ground invasion of Gaza and a month of conflict that has resulted in the deaths of some 1,900 Palestinians.

“The new Snowden documents illustrate a crucial fact: Israeli aggression would be impossible without the constant, lavish support and protection of the U.S. government, which is anything but a neutral, peace-brokering party in these attacks.” writes Greenwald.

In 2003 and 2004, Israel pressured the NSA to expand an intelligence-sharing agreement, code-named “Gladiator,” by requesting funding in the hundreds of millions of dollars. That specific proposal appears to have been derailed by the excessive demands of the Israeli government, according to the Intercept. In another instance, however, a covert payment of $500,000 was given to Israeli operatives by the NSA for unspecified reasons, as detailed in a receipt of funds provided by Snowden.

According to a top-secret NSA report, dated April 13, 2013, U.S. intelligence-sharing with the Israeli government expanded to include the Military Intelligence Directorate (Aman) and Mossad, Israel’s counterintelligence and covert operations agency.

“The Israeli side enjoys the benefits of expanded geographic access to world-class NSA cryptanalytic and SIGINT engineering expertise, and also gains controlled access to advanced U.S. technology and equipment via accommodation buys and foreign military sales,” the classified report says.

The “expanded” access includes the regions of “North Africa, the Middle East, the Persian Gulf, South Asia, and the Islamic republics of the former Soviet Union.” It allows for the “exploitation of internal governmental, military, civil, and diplomatic communications; and external security/intelligence organizations” of the countries within those regions.

Cooperation between Israel and Britain’s GCHQ and Canada’s CSEC signals intelligence agencies were also highlighted by the Intercept’s report.

A project in 2009 codenamed “YESTERNIGHT” provided for a “trilateral targeting exchange agreement” between the GCHQ, NSA, and Israeli intelligence, in which Palestinians were identified as a “specified intelligence topic,” according to an internal GCHQ document. Due to Israel’s involvement in the project, however, the direct targeting of Palestinian and Israeli individuals was prohibited, the Intercept reports. The British agency specified in the document that, by request of the Israeli government, they had conducted electronic surveillance on specific email addresses and telephone numbers. A separate 2009 project was also revealed to included Canadian intelligence services, in addition to American, British and Israeli intelligence.

“Beyond their own surveillance programs, the American and British surveillance agencies rely on U.S.-supported Arab regimes,” Greenwald writes, “including the Jordanian monarchy and even the Palestinian Authority Security Forces, to provide vital spying services regarding Palestinian targets.”

A classified NSA document from 2013 describes how Jordan, a key U.S. ally in the Middle East for the past three decades, is tasked with providing the NSA surveillance on Palestinians. “[Jordan’s surveillance agency, Electronic Warfare Directorate, or EWD] provides high-interest, unique collection on targets of mutual interest, such as the Palestinian Security Forces (PASF); EWD is the sole contributor to a large body of NSA’s reporting on this target,” the documents says.

The documents further reveals that, while spying on the Palestinians, the various Five Eyes agencies, which also includes Australia and New Zealand, also solicits intelligence from them.

A classified GCHQ document describes information provided by the PA as critically important and “often our best look at violence in the region,” highlighting clashes between Hamas and Fatah political parties in Gaza. The Palestinian Authority Security Forces (PASF) are not, the document notes, a military or terrorist threat to the United States or its allies, however: “[T]he groups the PASF personnel report on include many groups classified as terrorist organizations by the U.S. government.”

The Intercept’s report also reveals that, despite a close relationship with the U.S. and its allies, Israel’s activities have, in many ways, been viewed as a threat to peace and prosperity in the Middle East.

“Policy makers remain deeply concerned over the potential threat that Israel poses to a peaceful resolution of the Iran problem, and to some of Israel’s less desirable activities in the region,” a top secret GCHQ document says.

Regardless of those concerns, the level of military support extended to Israel by the U.S. government since the beginning of the recent Gaza invasion has been nothing short of spectacular, even as White House has attempted publicly to define itself as a peacemaker.

“[T]he NSA’s extensive, multi-level cooperation with Israeli military and intelligence agencies is part of a broader American policy that actively supports and enables Israeli aggression and militarism,” writes Greenwald. “Every Israeli action in Gaza has U.S. fingerprints all over it.”

During a press briefing last month, President Barack Obama talked about the mounting civilian deaths in Gaza. “[T]hat is why it now has to be our focus and the focus of the international community to bring about a cease-fire that ends the fighting and that can stop the deaths of innocent civilians, both in Gaza and in Israel,” he said.

The White House condemned last Wednesday’s predawn attack on a United Nations school at the Jabaliya refugee camp by Israeli forces as “totally unacceptable and totally indefensible.” Of the 3,300 Palestinians who had taken refuge there, 21 were killed and at least 90 were injured. On the same day, the Pentagon told CNN that they were in the process of resupplying the Israeli military with 120mm tank rounds—the very armament believed responsible for the deaths at the U.N. facility.

Similarly, the sale of over half-a-billion dollars worth of Sidewinder missiles to Israel was approved by the U.S. State Department on July 14, the same day President Obama issued a statement in support of a ceasefire: “I believe further escalation benefits no one, least of all the Israeli and the Palestinian people.”