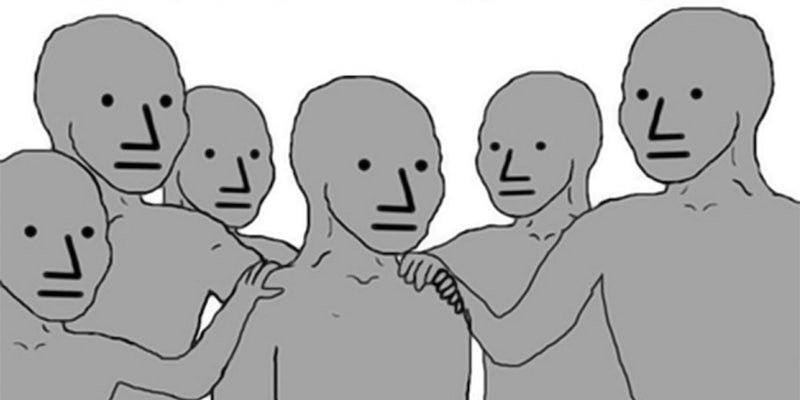 The polarizing meme appeared on Twitter just weeks before the midterms.

On Tuesday, a pro-Trump meme that started in the bowels of the far-right internet made it all the way to the New York Times. The meme, popular on the pro-Trump Reddit channel r/The_Donald, centers on nonplaying characters (NPCs). So what is NPC? It’s video game terminology for a character who gives directions or advice to help move the plot of the game along. And that’s the gag—players can’t control automated NPCs.

Over the past couple of weeks, the phrase has been used to explain away anyone advocating a leftist or liberal point of view.

Essentially, the joke is that anyone who is anti-Trump isn’t practicing free thought—they’re simply parroting what CNN tells them to think.

Visually, the NPC meme relies on a rudimentary image of a grey man, with simple, Microsoft Paint-esque features. Sometimes he appears alone, or in herds of identical grey men.

Sometimes, the memes include coding commands, like the one above, to “tell” the NPC how to react to a given situation, like the one above. They play on “liberal automatons,” unable to process information that differs from their worldview.

What is NPC: The NPC meme

The meme itself is an evolution of the pro-Trump right’s criticism of the left; previously, they’ve been “snowflakes” who are easily offended and hate free speech. Snowflakes though, refer to delicate individuals who can’t afford to have their sensibilities hurt. Now, the opposite criticism is taking place: that they are all acting in accordance, without free will.

Like a lot of conservative memes, the rhetoric helps insulate it from criticism. If a number of people claim they aren’t being brainwashed to fight the depiction, well, they’re just brainwashed to say that. Any criticism of the meme’s logic is proof that you’re a stupid NPC sheep.

While the NPC memes started on Reddit and 4Chan, they’ve moved to a more mainstream platform: Twitter. Recently, hundreds of accounts featuring the stock grey character as an avatar have popped up on the social media site.

The meme is apparently having real-world consequences, too.

About 1,500 NPC-related Twitter accounts have been suspended by the tech company for intentionally providing misleading information about the upcoming midterm elections, like saying the elections are Nov. 7, not Nov. 6, and telling people not to vote.

The right wing already has a beef with Twitter. From accusations of “shadowbanning” to #verifiedhate, many on the right are convinced they’re being purposefully targeted and silenced when they’re suspended or blocked from Twitter or Facebook for violating the companies’ guidelines.

The NPC purge is no exception, despite this clearly being a case of fake accounts distributing false information.

Is Twitter election meddling by censoring the NPC meme? My sources say… YES! They are! This is some pretty hilarious shit, laughing at all these #illiberal reactionaries over a meme! https://t.co/KY2AtoEb2y #FailingNYT

And some of them are pissed about mainstream media coverage.

Of course, by covering it all in the same fashion, the media is just proving to conservatives they too are NPCs. It’s a meme that truly works for every facet of liberal criticism of the right.