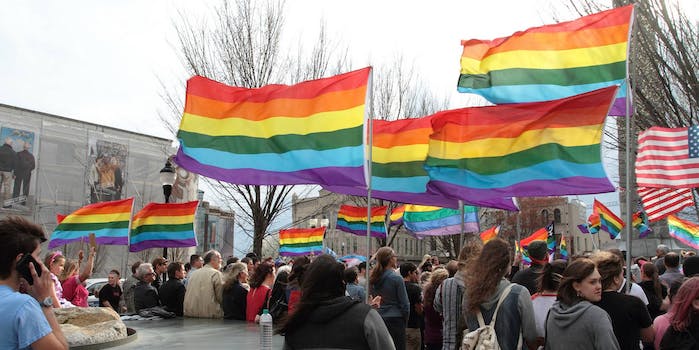 This issue is not going away.

The fury over North Carolina’s House Bill 2 law is not dying down. On Monday dissatisfaction from the law’s opponents burned with intensity, as protesters occupied the state legislature building in Raleigh for much of the day and prevented the lawmakers from working in the evening, resulting eventually in 54 arrests, according to the Raleigh News & Observer.

The tweets below tell part of the story.

#HB2 has got to go! Our people turning up at the People's Session #wecame2slayhb2 pic.twitter.com/7jHQ4lNQ5i

The aim of the protesters is to repeal the HB2 law—which was passed last month by the Republican-controlled legislature and is seen as an anti-trans law that disallows the state’s local governments from enforcing anti-discrimination laws. It also is also known as the “bathroom bill” because it makes it illegal for transgender people to use the restrooms for the gender with which they identify.

As a result, corporations are pulling business from the state, and a plethora of entertainers—including Bruce Springsteen and Pearl Jam, and, most recently, Demi Lovato and Nick Jonas—have canceled concerts to protest the law.

While Gov. Pat McCrory tweaked the law earlier this month, he did nothing to change the state’s mandate on forcing people to use the bathroom that corresponds with their birth gender.

That wasn’t enough to satisfy those who are opposed to the law. And on Monday, the first day the legislature was in session, protesters delivered 20 boxes of petitions reportedly containing close to 190,000 signatures of those who want the law to be repealed.

McCrory, though, seemed unimpressed by the petitions.

Meanwhile, four Democratic lawmakers introduced House Bill 946, which would repeal HB2 and reinstate any local nondiscrimination laws that were banned by it.

One transgender woman named Mara Keisling, the executive director for the National Center for Transgender Equality, took it upon herself to use the women’s bathroom at the state house in front of a police officer on Monday. Afterward, she told BuzzFeed that it “was uneventful. No one was bothered, because when I go to the bathroom, I do my business, I mind my own business, and then I go about my business. … They are not even enforcing this stupid law in state office buildings.”

Keisling reportedly was later arrested while protesting. Toward the end of the day, as the building was about to close, police told protesters to leave or they’d be arrested, as well.

Arrests about to begin… pic.twitter.com/2b71No7UgT

This is the arrest process, one protester at a time. Rinse. Repeat. #ncpol #HB2 pic.twitter.com/w9K3tHMuux

McCrory was in Wilmington, North Carolina, for a public appearance. He told reporters, via the Associated Press, that the HB2 repeal is “not going to happen.” House Speaker Tim Moore said repealing the bill is “not something we’re even talking about right now.”