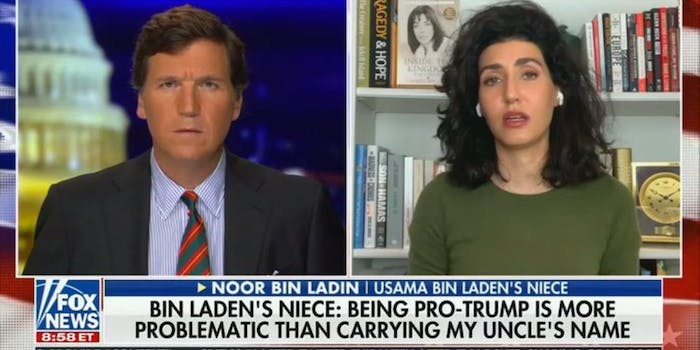 Noor bin Ladin discussed how she's received more hate for being pro-Trump than for her last name.

Noor bin Ladin, Osama bin Laden’s niece, recently wrote that she has received more backlash for being a supporter of President Donald Trump than for her last name. On Friday night, Tucker Carlson brought her on Fox News to discuss that sentiment.

“What a remarkable thing to say. I want to hear you say it. Is that true? You’ve received more abuse for backing Donald Trump than for being the niece of Osama bin Laden?” Carson asked her.

“As you can imagine, there are a few challenges that come with carrying this name, not least on a personal level being associated to a man whose values and beliefs are so diametrically opposed to my own, but yes,” bin Ladin said. “I find it quite interesting that in certain elitist circles I’ve encountered, I’ve faced so much arrogance and vulgarity for stating my beliefs, my support for the president.”

“It’s unlike anything I experienced before,” she continued.

People can’t help who they’re related to, and bin Ladin had nothing to do with her uncle’s actions, even repeatedly distancing herself from him. However, as bin Ladin herself pointed out, many find her pro-Trump and QAnon-supporting views to be what is problematic about her and can’t help but find Fox News bringing her on for a segment “weird.”

Some critics are saying conservatives have gotten so desperate that Fox News is willing to bring on bin Laden’s niece to garner support for Trump. Others—on both sides of the aisle—simply can’t get past bin Ladin’s appearance.

“Boutta risk it all for Noor Bin Ladin,” another wrote, with others declaring that they can “fix her.”

Bin Ladin first went viral in September when she did her first-ever media interview with the New York Post. In the interview, she endorsed Trump’s reelection campaign and claimed that only he could prevent another 9/11-style attack from happening (Osama bin Laden was the mastermind behind the 9/11 terrorist attacks). While bin Ladin lives in Switzerland, she told the Post she’s “an American at heart” and considers the U.S. to be her “second home.”

“Trump has shown he protects America and us by extension from foreign threats by obliterating terrorists at the root and before they get a chance to strike,” she said at the time.