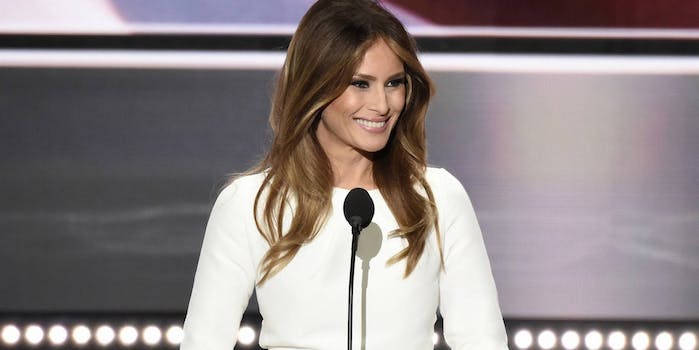 No one knows who to blame.

CNN, however, reports that Trump’s presidential campaign will not fire anybody on the campaign or “take any disciplinary action against anyone for the Melania Trump speech plagiarism controversy.”

In an interview with CNN on Tuesday, Trump’s campaign chairman Paul Manafort denied any claims of plagiarism.

When asked who will take the blame for the similarities between Michelle and Melania’s speeches, Manafort said, “There’s [was] no cribbing of Michelle Obama’s speech. These are common words and values—that [Melania] cares about her family, things like that. She was speaking in front of 35 million people last night; she knew that. To think that she would be cribbing Michelle Obama’s words is crazy.”

Manafort then went on to blame presumptive Democratic nominee, Hillary Clinton, for spreading the story, saying this is what happens when Clinton is “threatened by a female.”

“This is once again an example of when a woman threatens Hillary Clinton she seeks out to demean her and take her down,” Manafort said on CNN. “It’s not going to work.”

The campaign chairman repeated his attack on Clinton in a press conference a few hours later.

“It’s just another example as far as we’re concerned that when Hillary Clinton is threatened by a female, the first thing she does is try to destroy the person,” he said. “But it’s politics, we recognize it, and we’re just going to move on.”

Paul Manafort dismisses criticism of Melania speech, says it's what happens when Clinton "is threatened by a female" https://t.co/yHDg5uiGzK

“In writing her beautiful speech, Melania’s team of writers took notes on her life’s inspirations, and in some instances included fragments that reflected her own thinking,” Miller said. “Melania’s immigrant experience and love for America shone through in her speech, which made it such a success.”

But not everyone thinks no one should be punished for the plagiarism.

On early Tuesday, former Trump campaign manager Corey Lewandowski also implied that whoever is responsible for writing Melania’s speech should be fired. A video of Lewandowski’s claims was posted to Twitter by ABC7 Chicago’s Ben Bradley.

“I think that Mrs. Trump is a very smart, articulate woman,” Lewandowski said. “Her thoughts are her own thoughts. And I think if it was a mistake, it was at the staff level and staff should be held accountable.”

In an interview with CNN, Lewandowski also implied that Manafort was responsible for the alleged plagiarism.

“Well I can tell you that when I was the campaign manager, the buck stopped with me, and I am sitting here with CNN now,” Lewandowski said. “When you are looking at and scrutinizing the GOP nominee’s wife to give the largest speech, in front of 35 million people, there is no detail that you should overlook.”

Lewandowski says Manafort bears some responsibility (in not so many words)… https://t.co/3ffBy17eNi

According to The Guardian and other media outlets, campaign staffer Rick Gates oversaw Melania’s speech. However, in an interview with CNN’s Jim Acosta, Gates denied his involvement in the speech process.

As reported earlier, two of Trump’s children will speak at the RNC on Tuesday night. However, given the claims against Melania, their speeches will likely be under even greater scrutiny.