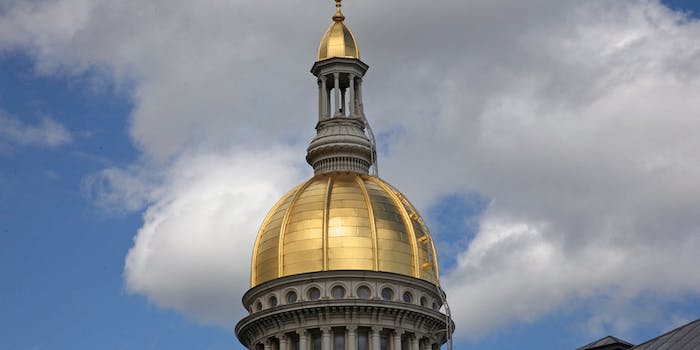 Your mom, however, may continue to snoop freely.

With Governor Chris Christie’s signature, New Jersey last week became the latest state to pass a law preventing companies from asking for social media user names, passwords, or other account info from employees. Not that you’ve been making fun of your boss on Twitter… right?

Similar legislation is pending or on the books in 37 other states, along with many laws that ban colleges and schools from asking their students for the same data. New Jersey had previously passed such a measure, though Gov. Christie had sent the corporate bill back to the State Senate with a conditional veto, saying it was “too broad.”

According to NJ.com, the governor wanted a bill that was properly balanced between “protecting the privacy of employees and job candidates, while ensuring that employers may appropriately screen job candidates, manage their personnel, and protect their business assets and proprietary information.”

Bill A2878, in short, “Prohibits requirement to disclose user name, password, or other means for accessing account or service through electronic communications device by employers.” Companies in violation of this new law, which goes into effect in four months, would face a $1,000 fine for the first offense and $2,500 for the second.

Still, companies have some leeway. Much of the text phrases the issue as a problem of discrimination or retaliation (i.e., you can not legally be punished or fired for refusing to disclose your Facebook particulars), but that’s hardly their only access point: “Nothing in this act shall prevent an employer from implementing and enforcing a policy pertaining to the use of an employer issued electronic communications device,” for example, so be careful with your BlackBerry, if . Plus, if the employer suspects you of leaking their information, they have the right to investigate you fully.

There’s also everything about you that remains in the public domain, so while this type of legislation represents a great step forward on the privacy front, you really ought to Google yourself now and then. And remember—your supervisor doesn’t need any passwords to know about your behavior at the company holiday party. Your Instagram photos of restaurant food, however, are safe.