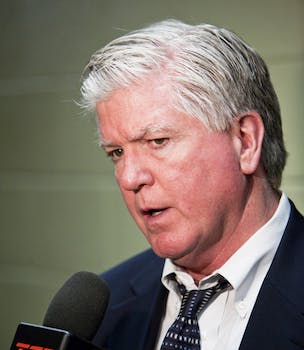 Slobberface, mowerman, sir psycho sexy, and all the rest of you Internet commenters, listen up. Brian Burke is coming for you.

Slobberface, mowerman, sir psycho sexy, and all the rest of you Internet commenters who keep posting mean things about NHL executives, listen up.

Brian Burke is coming for you.

Burke, who until January was the general manager for the Toronto Maple Leafs, has filed a defamation lawsuit against 18 Internet commenters, identified only by their username, who Burke says falsely accused him of having an affair and a child with sportscaster Hazel Mae.

In his legal claim, Burke admits he has no idea who those commenters are or where they’re based, though they congregate on Websites based in Canada, where the suit’s been filed.

The fact that Burke, was fired wasn’t surprising, considering he’d coached four seasons without a playoff appearance. But the timing, mere days before the abbreviated 2013 season started, surprised members of his own team.

Leafs owner offered a quiet statement: “we’ve decided to make a leadership change and go a different direction with the general manager.”

But these commenters allegedly decided on a different story. On message boards and under news articles, anonymous Internet users left comments like what IsolatedCircuit wrote (after leading with “Could there be some truth to this??”) on WordPress:

Well it didn’t take long for Brain Burke and Hazel Mae to hook up. In the summer of 2012, Sportsnet removed her from the glass desk because she wouldn’t fit, insisting that she stand while on air. The reason she wouldn’t fit is that she was pregnant.

As a result of such comments, Burke—now an assistant scout with the Anaheim Ducks—”has suffered, and continues to suffer, losses and damages consisting of damage to reputation generally and damage to professional reputation,” he claims. He doesn’t want money. He just wants:

an injunction restraining each Defendant […] from publishing or causing to be published on the internet or by any other method or medium, the Defamatory Statements, or any substantially similar defamatory statements.

“A lot of people think that they can with impunity say whatever outrageous things on the Internet and nobody’s ever going to be able to find them or hold them accountable,” Burke’s lawyer, Peter Gall, told The Star.

“Brian is going to hold them accountable.”

Canada’s Bill of Rights lists “freedom of speech” as its fourth item.