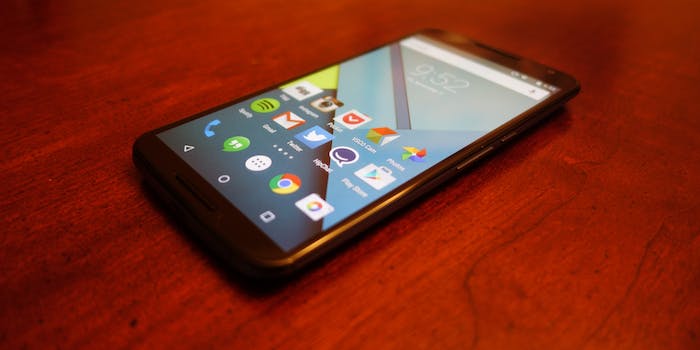 Nexus 6 review: A beautiful phablet and the sweetness of Android Lollipop

Google is aiming for the top spot with the Nexus 6. Did it suceed?

The Nexus line has always felt like an experiment. Ever since the first Nexus phone was released way back in 2010, the pure Android offering gave us a glimpse into the future of the world’s most popular mobile operating system, but never felt like a true flagship device. Until now.

Bursting with unbridled power, the Motorola-built Nexus 6 is a true flagship phone with all the bells and whistles—and the $650 off-contract price tag to match. (It will also be available on contract at AT&T, T-Mobile, Sprint, and Verizon Wireless.) No shortcuts have been taken with the Nexus 6; this is a shot aimed straight at the top smartphones on the market, and Google has nearly exceeded them all. One thing the Nexus 6 isn’t is small. Gargantuan phones have become the trend over the last two years, and the Nexus 6 is no different. Using the recently released Moto X as a template, Google and Motorola crafted a phablet that doesn’t feel nearly as big as it is.

The Nexus 6 is wider and a bit thicker than the , though the slight curve of it makes it easier to hold. Just like the Moto X, there are no physical buttons on the front of the Nexus 6 (at this point no Android phone really needs them).

The display isn’t the best in the industry—the Samsung Galaxy Note 4’s qHD display is more vibrant and somehow the lower-resolution iPhone 6 Plus display looks like the best screen in the world—but the Nexus 6 isn’t a pushover. The 493 PPI display has great color balance, albeit slightly muted, but not in a bad way. Google and Motorola have gone for clarity over flash, and it has served them well.

Framing the display are two stereo speakers. They aren’t particularly great, but they do produce more sounds than a mono speaker, though they can sound tinny at times. A 13MP camera with optical image stabilization (OIS) and a rounded LED flash adorns the rear of the Nexus 6.  The camera does take above average pictures, but it isn’t quick about it—the Nexus 6 camera is noticeably slower than both the Galaxy Note 4 and iPhone 6 Plus.

Low-light photos are decent but not great. The rounded LED is a slight improvement over the standard LED flash found on most smartphones, but honestly, no one should use flash unless absolutely necessary.

The camera won’t be the reason you buy the Nexus 6, but it won’t keep you from purchasing it. It can hold its own against most other flagship cameras like the Moto X and Galaxy Note 4. However it won’t match up with the Samsung Galaxy S5, the iPhone 6, or 6 Plus.

Inside the Nexus 6 is the powerful combination of the Snapdragon 805, a 2.7GHz quad-core processor, and 3GB of RAM, making this one of the most powerful phones around, and it shows. Chrome tabs rarely ever reload, animations are effortlessly smooth, apps load faster than ever.

Google didn’t fall into the 16GB trap that Apple is seemingly unwilling to pull itself from, instead putting 32GB of storage in the cheapest Nexus 6. You can also get the Nexus 6 in 64GB variation. Next to that processing power is an enormous 3,220 mAh battery, matching the Galaxy Note 4, and exceeding the 2,915 mAh battery in the iPhone 6 Plus. In my informal tests, the Nexus 6 outpaces both of those devices when it comes to battery life.

As of this writing, it has been a little over two days since I charged the Nexus 6, and I have 19 percent of my battery left. This is with moderate usage, including a considerable amount of email and Twitter notifications, a few phone calls, Web browsing, streaming Spotify, and checking Instagram at a rate I would prefer not to admit.

What may be the Nexus 6’s best feature is Motorola’s Turbo Charger. The Nexus 6 charges faster than just about every other phone on the market—a 15-minute charge can give you up to six hours of usage.

Coupled with excellent battery life, the Nexus 6 is the top phone on the market for the battery conscious who don’t want to be tied to Verizon’s network. (Verizon has the Droid Turbo which comes with a massive 3,900 mAh battery.)

The Nexus 6 seems to manage power consumption much better than previous Nexus devices, which were known to have lackluster batteries at times. This is in part due to Motorola’s engineering—lock screen notifications that come up in black and white instead of full color, and a highly effective ambient light sensor—but the more efficient Android 5.0 deserves some of the credit as well. Android 5.0, known by its more friendlier moniker, Lollipop, is the operating system Android users have been waiting for. Google has completely overhauled its OS with a fresh new design language, called Material Design, and added a slew of features that bring Android and iOS closer to parity than ever before.

Lollipop’s design is a revelation—Google’s Material Design is easily the best visual work the company has ever done. A new responsive design with drastically improved visual elements, and excellent animations make Android Lollipop the most beautiful mobile operating system on the market.

Android is smoother than ever—the lag experienced in many of its devices has all but been erased here. Animations are improved, and menus have been revamped with a navy blue color scheme.

Looks aren’t the only thing it has going for it, as Google added nearly every major feature users have been clamoring for. Android Lollipop comes fully encrypted, a new feature called tap & go that lets you transfer data from your old device to your new one using NFC (making device setup so much easier), improved switching between Wi-Fi and cellular data, and new battery saving features. 
Lollipop will let you know how much longer your battery will last, and how long it will take to recharge your device. The new battery saver can extend the life of your device up to 90 minutes by limiting vibration, background data, and ambient display. Thankfully the battery saver automatically shuts off once you charge your phone, which will help you to avoid missing critical notifications that may have otherwise been ignored to preserve battery life.

One of the best features in Lollipop is multiple user profiles. User profiles lets you log in to any Android device running Lollipop and see your contacts, messages, and photos. There is also a guest mode that lets you lock down your sensitive information when you want to let someone use your device. You can archive mail from the lockscreen, just as you can on iOS, but Lollipop lets you read much more of the email than the iOS lockscreen allows. You can also hide sensitive content from the lock screen on an app-by-app basis. Gmail has received an update as well, bringing it in line with Material Design. The mostly visual overhaul is an improvement over the previous editions of Gmail.

Maps also received a design overhaul to match Lollipop. It now lets you reserve a table at a restaurant through OpenTable, and estimated pricing and ETA for Uber is directly available in the app.

The uniformity of the apps shouldn’t be understated; this is something Apple continually gets right, and Google has had some trouble doing, but in Lollipop it finally all comes together.

The biggest update Google made to its flagship apps are found in Google Calendar, and it may be the best calendar around. Using its amazingly accurate algorithm, Google Calendar now pulls events directly from Gmail, an insanely helpful feature for those of us who spend precious time doing this manually. 
Flights, concert tickets, hotel reservations, etc are automatically added to Google Calendar’s new schedule view, complete with all the information you may need. The new layout of Google Calendar is one of the best I’ve seen out of any Calendar app, and the size and resolution of the Nexus 6 lets you see a ton of events at one time.

Google Calendar understands natural language input, allowing you to type something like “dinner with Taylor at The Cosmopolitan,” and thanks to Assist and Google will intelligently suggest the right location and any contacts with that name as you type in the event.

The combination of the Nexus 6 hardware and Android Lollipop makes this the best smartphone on the market. Yes, it is big, but if you can handle the size, there is no better Android device currently available.

Google cut no corners with the Nexus 6 and it shows; it is clearly a better device than the Galaxy Note 4, and is a direct competitor to the iPhone 6 Plus. When it comes to phablets, Google and Apple make the best devices, without question.

The term “iPhone-killer” has been bandied about for years, as people look for something that can surpass the world’s most popular phone. But what we actually have wanted is a device that doesn’t make you forego any of the great features you can get on the iPhone. A device that doesn’t give in and choosing it over any other smartphone on the market doesn’t feel like a let down in any way.

If you are extremely serious about photography, or can’t live without a certain iOS-only app, go for the iPhone 6 Plus. But if you aren’t, there is finally a device that allows your choice to come down simply to preference, without sacrificing any major features on either side. The Nexus 6 is that device.

So what will it be, iOS or Android?