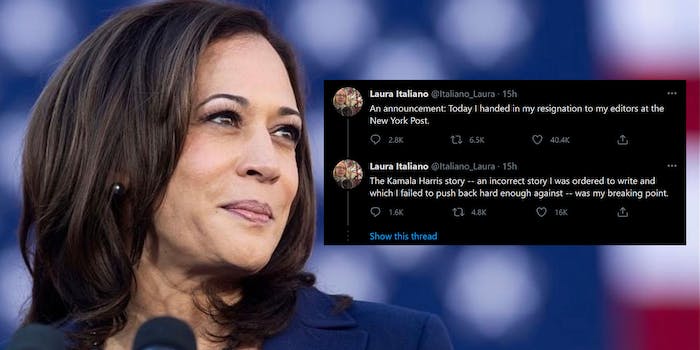 'The New York Post article had no attribution for the claim that Harris’s book was being distributed in welcome kits.'

A reporter for the New York Post announced her resignation via Twitter on Tuesday night, claiming that her editors made her write an “incorrect” story on Vice President Kamala Harris.

Laura Italiano composed a three-tweet thread which included her reason for resigning. The first tweet was just a simple announcement noting that she handed in her resignation to her editors at the Rupert Murdoch-owned newspaper.

She then tweeted, “The Kamala Harris story — an incorrect story I was ordered to write and which I failed to push back hard enough against — was my breaking point.”

That referred to an article alleging that copies of Superheroes are Everywhere, a children’s book penned by Harris, was part of a “welcome kit” given to unaccompanied migrant children at a shelter located in Long Beach, California.

“It’s just the latest open-arms gesture by the Biden administration,” Italiano wrote in the article, “whose mixed messaging regarding the border and immigration has been credited with the surge from Central America to the U.S.-Mexico border.”

The story appears to base this on a Reuters photo showing the book on a cot at the facility. However, an editor’s note at the end of the current version of the story reads, “The original version of this article said migrant kids were getting Harris’ book in a welcome kit, but has been updated to note that only one known copy of the book was given to a child.”

The story, in Post-ian fashion, was teased on the cover with the headline, “Kam On In,” a pun playing on an ongoing narrative that Democrats are lenient in letting migrants into the United States.

A New York Times article on the brouhaha noted that the article fueled conservative criticisms of President Joe Biden’s administration. “The story whipped around conservative media and elicited denunciations from leading Republicans, including the party chairwoman. A reporter for the Murdoch-owned Fox News, which published its own online article about the claims, asked about it at a televised White House press briefing.”

The Post covered that briefing in a Monday story, headlined “Psaki has no answers when asked about Harris’ book being given to child migrants.” That story quotes White House Press Secretary Jen Psaki saying, “I’d have to check with our Health and Human Services team” in response to a pointed question about whether Harris was making money from the book.

That article was also careful to point out that while the reporter pressed Psaki on the book being included in the kids’ welcome kits, “It has since transpired that the book pictured by Reuters was only one known single copy, donated by a community member.”

The changes to the article, according to CNN, were made Tuesday following a Washington Post article fact-checking the claims made in Italiano’s story.

“The New York Post article had no attribution for the claim that Harris’s book was being distributed in welcome kits,” wrote Salvador Rizzo, a reporter on the paper’s fact-checking team. “We repeatedly emailed the reporter, Laura Italiano, to ask how she arrived at that conclusion but received no response.”

The Washington Post article included high-profile tweets commenting on the story, which are still up despite the premise of the story being publicly debunked.

That included GOP Chairwoman Ronna McDaniel, who asked, “After learning officials are handing out Kamala Harris’ book to migrants in facilities at the border, it’s worth asking … Was Harris paid for these books? Is she profiting from Biden’s border crisis?”

Italiano didn’t elaborate in the tweets what else built up to what she characterized as her “breaking point.” In the third and final tweet in the thread, she wrote, “It’s been a privilege to cover the City of New York for its liveliest, wittiest tabloid — a paper filled with reporters and editors I admire deeply and hold as friends. I’m sad to leave.”

As of Wednesday morning, those three tweets were the only ones visible in her timeline.