Including new family options and a squirt gun.

The next version of Apple’s mobile operating system will come with a squirt gun. It’s one of more than 100 new and redesigned emoji characters that will be rolling out with iOS 10 in the fall, and the water pistol is replacing the current pistol emoji that looks like a real weapon.

Other emoji include female athletes and different professions, as well as single family options and a rainbow flag. In a press release, Apple said the company is working closely with the Unicode Consortium, the body that approves emoji designs, to reflect diversity in emoji sets. 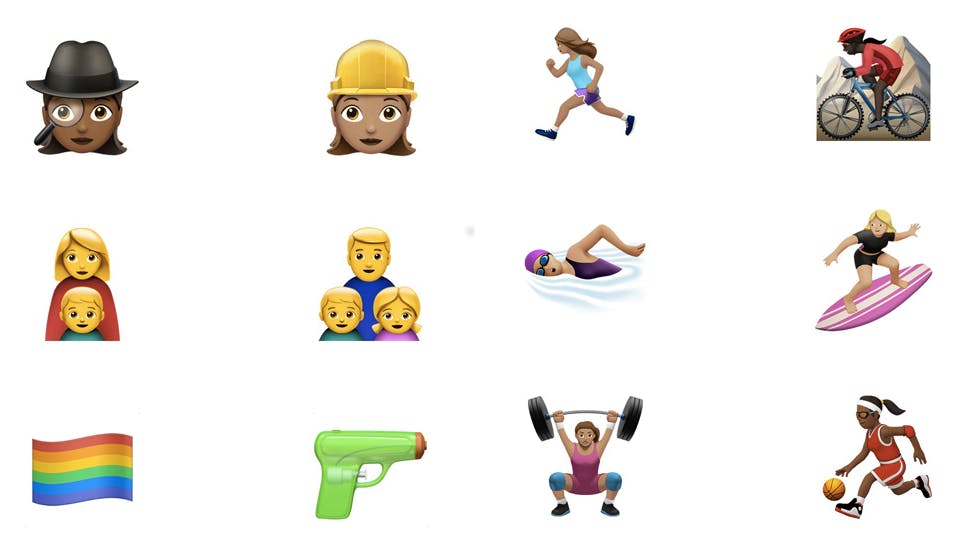 For years people have called on companies and the Unicode Consortium to bring more options to emoji, including better representation among the tiny icons based on gender, race, culture, LGBT identities, activities, and professions. In May, Google proposed a number of new female and professional emoji to promote gender equality, and the Unicode Consortium accepted the proposal last month.

Additionally, activists have called on platforms to eliminate the lifelike gun emoji. Last year, New Yorkers Against Gun Violence started a campaign targeted at Apple to pull the pistol from the emoji selection. A bright green water pistol now sits where the gun did, among swords and a coffin, though the emoji translation between platforms is already causing some trouble.

Apple changing the "gun" emoji is extremely dangerous. I playfully send a water gun, and someone else sees a loaded pistol pointed at them?

(This means an iOS user could send a "fun" squirt gun emoji to someone with a standards-compliant device and they'd see a revolver instead.)

The current crop of emoji are rather stereotypical in their gender roles—professions like police officers and medics, and activities like swimming and running, are portrayed by male emoji ,while female emoji include princesses or getting their hair cut. And they don’t adequately represent the more than 90 percent of online consumers who use emoji.

Many young women are not satisfied with how they’re portrayed in emoji, according to a survey from feminine care brand Always, but the changes rolling out with iOS 10 and future iterations of the accepted Unicode Standard could begin to shift those stereotypes.

Apple’s announcement follows Facebook’s recent launch of more than 1,500 new emoji on Messenger, many of which improved diversity within the group of tiny icons, focusing similarly on gender, race, and activities.