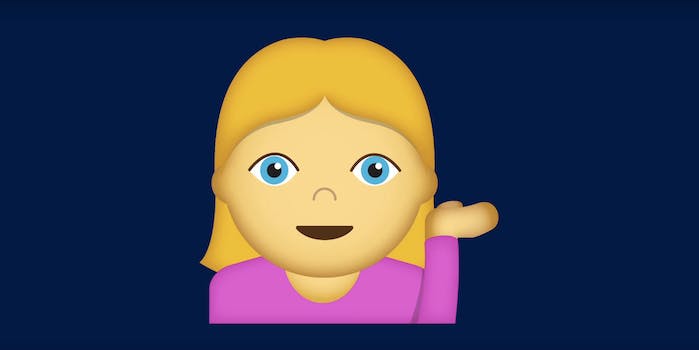 Many young women find female emoji to be horribly stereotypical

Girls are not happy with how they’re represented in emoji. The pink shirts, bunny ears, and princess crowns are limiting and stereotypical, a new study finds.

Feminine care brand Always surveyed 1,006 American women between 16 and 24 years old to find out whether the implicitly gendered emoji accurately represent the interests, jobs, and activities women engage in on a daily basis. Overwhelmingly, young women agree that emoji represent gender stereotypes and that there should be more diversity in the ways women are portrayed in the tiny graphics.

The study is part of Always’ #LikeAGirl campaign that aims to stop the drop in confidence young women experience as they go through puberty.

“There’s no girls in the professional emojis, unless you count ‘bride’ as being a profession,” one girl said in the #LikeAGirl video explaining the problem with emoji.

Scroll through your emoji library and you’ll see distinct gender differences. The police officer, runner, swimmer, detective, and other professional and active emoji are all men, while women are dancers, a haircut client, and a bride.

Young women think this is a problem; 54 percent of those surveyed believe female emoji are stereotypical and 67 percent think the current female emoji imply girls are limited in what they can do.

“Society has a tendency to send subtle messages that can limit girls to stereotypes,” Lucy Walker, documentary filmmaker and creator of the #LikeAGirl video, said in a statement. “As someone who has studied sociolinguistics, I know the kind of impact even seemingly innocuous language choices can have on girls. It was so interesting to hear these girls talk about emojis and realize how the options available to them are subtly reinforcing the societal stereotypes and limitations they face every day.”

The 75 percent of young women who want to see female emoji portrayed more progressively might get their wish soon. The Always study comes just after the Unicode Consortium proposed new ways of modifying emoji, which include the ability to switch genders on emoji like the police officer or athletes.

It would be a huge step toward more diversity in the tiny icons we use to tell stories and share feelings. By adding the option to change genders, women will be further represented in the iconography they use on a daily basis, and eliminate some of the obvious stereotypes that exist in emoji today.

The Unicode Consortium proposal is just that—an outline of what emoji modifications should be included in a future update. It’s not official yet, but hopefully the pink-clad hair toss emoji will soon have a place next to a female detective.