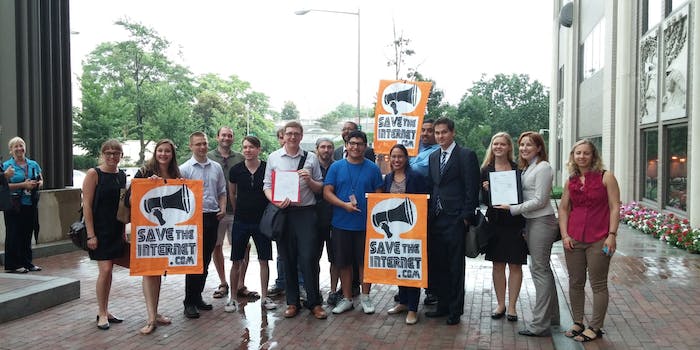 Doing it the old-fashioned way.

Shortly after 3:30pm on Tuesday afternoon, a group of net neutrality activists walked out of the rain, into the lobby of the Federal Communications Commission (FCC) building in Washington, D.C., through the metal detectors, and dropped off massive stacks of printed-out comments in a clerk’s office.

The in-person delivery of dead-tree feedback, a decidedly low-tech way of weighing in on a high-tech issue, had been dictated by circumstances on the Internet that gave the activists cause for hope.

Tuesday was set as the initial deadline for public comments on the FCC’s plan to regulate the Internet, but the agency’s Web-based system for receiving comments collapsed early in the day. (The FCC later extended the deadline to midnight on Friday, July 18.) Representatives from some of the largest groups supporting net neutrality quickly devised an alternate plan to submit the thousands of comments they had collected.

Free Press, a nonpartisan organization that advocates for net neutrality, announced the impromptu in-person drop-off event on Tuesday afternoon, as it became clear that the online commenting system would not be fully functional by the end of the day. Other groups participating in the event included the Electronic Frontier Foundation (EFF), the American Civil Liberties Union (ACLU), CREDO, Common Cause, and Fight for the Future.

As the appointed time for dropping off the comments approached, a small crowd of open Internet advocates, including a team from Free Press and a group from Reddit, milled about outside the FCC building, posing for photographs with their stacks of comments. Aside from this reporter and a television journalist with a cameraman, there did not appear to be any other members of the media present.

As they posed for photographs, several of the activists held orange signs promoting SaveTheInternet.com, a pro-net neutrality website set up by Free Press. Joseph Torres, Senior External Affairs Director for Free Press, says that he was encouraged by the sustained public engagement that had swamped the FCC’s servers.

“It means that a lot of people are really interested,” says Torres. “It speaks to the fact that there is a great deal of interest in this, that the public has a greater fundamental understanding of the importance of this issue to their own lives.”

In the past, Torres says, the FCC had been “this sleepy agency that no one pays attention to.” Now, people understood “the gravity of the issue before the FCC, and why the public needs to weigh in.”

Torres says he had seen a shift in how people viewed their relationship with technology, and he linked this awareness to the rise of broadband Internet access. In his work on net neutrality issues, he drew lessons from the grassroots campaign against two anti-piracy bills, the Stop Online Piracy Act (SOPA) and the PROTECT IP Act (PIPA). In late 2011 and early 2012, many of the same activists who are now advocating for net neutrality fought and won a campaign to defeat these anti-piracy bills, which they argued threatened free speech on the Internet due to overzealous copyright infringement provisions.

“SOPA-PIPA helped people to fully understand how important the Internet is,” Torres says. “It’s built a greater awareness of how critical our communication network is.”

The volume of comments that Free Press and other groups were submitting provid a reason to be optimistic about the public’s interest in net neutrality, according to Torres.

“We wouldn’t be doing this if we didn’t believe that it has importance,” he says. “To me, what all these comments speak to is that there is growing awareness of this issue. If you had to measure out what percentage of the public are aware of this issue, that line is going straight up fast.”

The reams of paper containing the public comments about the FCC’s open Internet regulations will be scanned and posted online by the FCC’s Office of the Secretary, which handles the receipt, processing, and distribution of all comments that are submitted to the agency. Torres did not have an exact figure for the number of comments that the activists dropped off on Tuesday, but he said that Free Press and allied groups would keep working to collect more comments before the FCC’s extended deadline.

“I think these comments are a further testimony to the FCC that we’re paying attention,” he says. “People have a fundamental understanding, more, today, of what an open Internet means.”