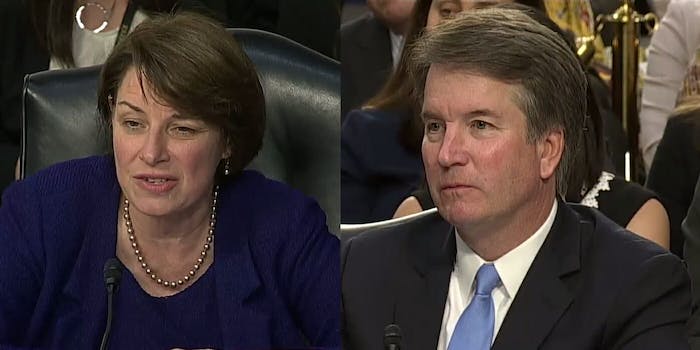 Sen. Amy Klobuchar (D-Minn.) grilled Supreme Court justice nominee Brett Kavanaugh about his views on net neutrality, a week after Democrats argued that he would “cripple” internet protections for “decades to come.”

The now-nominee essentially argued that the First Amendment rights of internet service providers were being violated by net neutrality protections, which he said were “unlawful and must be vacated.”

Klobuchar asked why Kavanaugh brought up the First Amendment in his dissent, which came after the protections were upheld by a panel of judges.

“You went actually beyond the bounds of what the parties had argued to reach a constitutional issue in that case,” she said. “You found that the First Amendment protects internet service providers’ right to exercise editorial discretion even though neither of the principal parties had raised a First Amendment argument at all. Why did you go out of your way to address that constitutional issue?”

Kavanaugh said the First Amendment issue was raised in briefs in the case.

The senator then pressed why he was the only judge who took on “constitutional issues” during the case.

“It just would seem that there are First Amendment rights of individuals to use the internet and express their own views,” she told the nominee, adding: “And if it gets too expensive for them to use it, you basically said that the companies have these First Amendment rights—not looking at the issue, that I think that a lot of us as policymakers see, is that unless you have some rules of the road in the place, it’s going to make it very hard for individuals and small businesses to access it.”

Last week several Democratic lawmakers brought up criticisms of Kavanaugh regarding his views on net neutrality.

Kavanaugh’s appointment to the Supreme Court would harm the efforts to save net neutrality because, as Sen. Edward Markey (D-Mass.) predicted, the “fate of the internet” would be decided in the Supreme Court in the future.

“His position on this issue, as on so many others, is outside the mainstream. He is extreme in his views of the First Amendment protecting cable companies,” he said.

The senator’s focus on net neutrality comes as Congress is in the midst of trying to usher through a fix that would overturn the Federal Communications Commission‘s (FCC) decision to rescind the protections late last year by using the Congressional Review Act (CRA).

If passed in the House, President Donald Trump would still need to sign it.