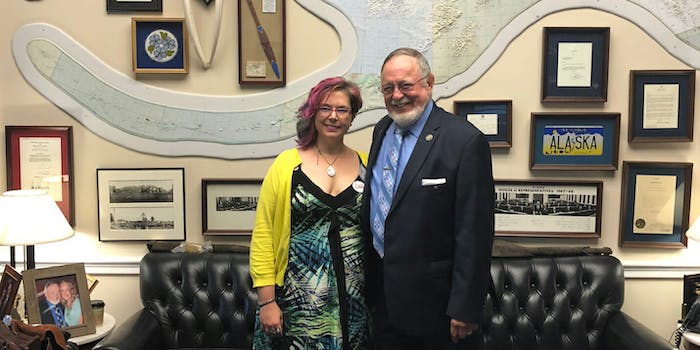 After some back-and-forth, Young's office stopped responding, she said.

For Jennie Stewart, the owner of CustomMousePad.com, the protections of net neutrality mean everything to her and her eCommerce business. When she heard that a group of advocates were meeting with lawmakers in Washington D.C. late last month to urge them to support an effort in Congress to overturn the Federal Communications Commission‘s (FCC) vote to dismantle net neutrality rules, she eagerly hopped on a plane for a short three-day trip with the goal of discussing the issue with her representative: Rep. Don Young (R-Alaska).

Stewart considered her meeting with Young a success, getting a commitment from Young to work to restore net neutrality. But now she says the congressman is refusing to go public with his promise and not returning any of her emails.

The story she told him as part of a Day of Advocacy was a familiar one for many small business owners whose shops are primarily online.

Her competition—Amazon, VistaPrint, Walgreens—are all giant companies, so the ability for potential customers to find her on Google is paramount to her success. Several months ago, Stewart said a “glitch” with her internet service provider (ISP) slowed her website down by three seconds, pushing her website off the first page of a Google search result.

The result? The worst sales week she’s had in 15 years.

“[Net neutrality] for us that is something that is near and dear, and what it means to us, is essentially our livelihood,” Stewart told the Daily Dot in a phone interview. “I’ve taken 16 years to build a business and it can go away instantaneously.”

Net neutrality is a founding principle of the internet that all internet traffic is treated equally by internet service providers (ISPs). Without the rules, advocates say, ISPs could “speed up” or “slow down” specific internet traffic. Small businesses like Stewart’s rely on an equal playing field online to compete with larger companies.

Given the importance of the issue for her and her business, when she was able to have a meeting with Young on June 26, she was delighted.

Much like she said she did with Sen. Lisa Murkowski (R-Alaska) earlier this year, Stewart wanted to implore Young to sign onto the Congressional Review Act (CRA) effort in the House of Representatives. It’s a measure similar to one that passed in the Senate earlier this summer, which could overturn the FCC’s net neutrality decision.

The meeting, Stewart said, went well. The two of them discussed why net neutrality is important for small businesses in Alaska, and at one point, Stewart said Young told her: “I don’t know why anybody would vote against this.”

Stewart said she left the meeting feeling “encouraged” after he gave her a “verbal commitment” to sign the discharge petition associated with the CRA to bring it to a vote and subsequently vote in favor of it should it reach the House floor. The Daily Dot was able to independently verify Stewart’s recollection of the meeting.

“I was really encouraged by our meeting, and his verbal support of signing the measure and signing the discharge even though he said it was not something he would frequently do, but it seemed to him that his constituents needed this and the small businesses in Alaska needed it and that it was important for everybody,” she said. “He gave a verbal commitment to the discharge and the CRA based on the concerns we had brought forth to him.”

Young’s office originally responded to a request for comment on July 11 from the Daily Dot about his conversation with Stewart and his “verbal commitment,” saying they would look into the matter. However, they have since not replied to any further inquiries.

On Tuesday, Stewart told internet rights group Fight for the Future about her meeting with Young, where she said she was “confident” the lawmaker would “follow through” with his verbal commitment.

“I’m afraid his silence means the telecom lobby got to him—and I really hope I’m wrong about that,” she told the group, in a post Fight for the Future published on Tumblr.

The lack of communication between Young’s office and Stewart, a constituent, caused her to become “disappointed” in her representative, she told the Daily Dot.

“I know that representative Young has, in the past, done things that are surprisingly bipartisan because they are right for us,” she said. “So getting a ‘yes’ was more than huge. It was a weight off my shoulders that there is the potential for this actually succeeding. I know the odds we started with, and the odds that lie in front of us now—and they are quite daunting. So the idea of getting a Republican, especially a senior Republican, to make this a bipartisan effort would be gigantic. As such, it’s something I was really excited about and relieved about that just hasn’t come to fruition.”

Last week, Rep. Mike Coffman (R-Colo.) said he would sign on to the petition, becoming the first GOP House member to do so.

Had Young gone public after his conversation with Stewart, he would have been the first Republican in the House to publicly support the CRA.

Update 7:03pm CT, July 24: Late Tuesday, Young’s office told the Daily Dot he would not sign the discharge petition in the House. A spokesperson said it was “not the best option.”

Murphy McCollough, Young’s spokeswoman, said the congressman supports protections that insure companies treat people “fairly regardless of how consumers choose to use the internet and regardless of the content they access,” adding that he does not support ISPs blocking or slowing down content.

However, McCollough said Young will not sign the discharge petition—a mechanism that is needed before the House can vote on the CRA—because he thinks it’s “a parliamentary option that should only rarely be used because they bypass regular order in committee.”

“A solution must also take into consideration the unique needs of Alaska, particularly our rural and remote communities,” McCollough said. “In these areas, the options for internet service are often severely limited. Closing the digital gap must be the highest priority.”