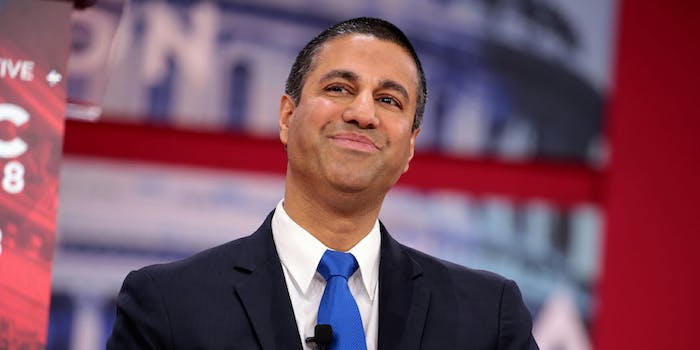 The investment argument was big ahead of the FCC's net neutrality repeal.

USTelecom, a trade association that represents broadband companies, released a report on Thursday that showed investment in broadband grew from $74.8 billion in 2016 to $76.3 billion in 2017.

The group is one of several that have joined lawsuits against Vermont and California over their net neutrality laws.

The FCC rescinded the protections in December 2017. At the time, Pai called the rules “heavy-handed” and has argued that regulations stifled investment and innovation.

Pai applauded the increase in investment in a statement released on Thursday, echoing his deregulation arguments in favor of repealing net neutrality.

Pai did not directly reference the FCC’s net neutrality repeal but hinted at the 2015 Open Internet Order, which enshrined the protections.

“Today’s report confirms that the FCC’s policies to promote broadband deployment are working,” he said in a statement. “After Internet service providers reduced new investments in 2015 and 2016 under the prior Administration’s regulatory approach, broadband investment increased in 2017 by $1.5 billion over the previous year.”

While the FCC chairman may seem to believe the investment numbers validate the repeal, studies show the vote was against the wishes of the vast majority of Americans.

A report released earlier this week from Stanford University found that after sifting through the millions of fraudulent comments left on the FCC’s website regarding its plan to repeal net neutrality—which are under investigation—nearly 100 percent of the real comments left were in favor of keeping the protections.