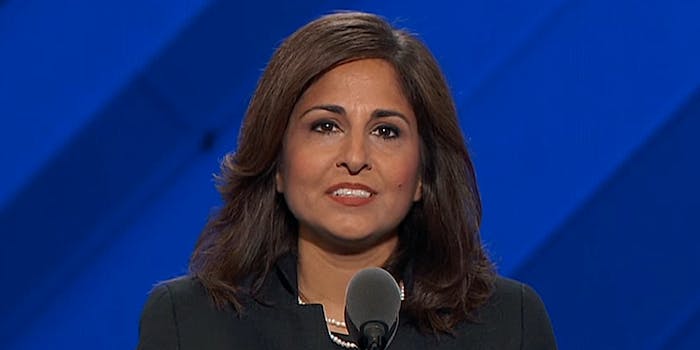 Biden's latest pick is notorious for late-night tweet battles vs. the left.

Because President-elect Joe Biden is expecting either a divided or oppositional Senate when he takes office, you can imagine his picks for top-level positions have undergone serious scrutiny, as to avoid any last-minute surprises that might sink a nomination in a combustible climate.

So it goes to follow that Biden doesn’t object to any of the public behaviors of the people he’s chosen, which means, congrats to everyone, late-night binge-tweeting doesn’t disqualify you anymore for a cabinet-level spot.

Biden tabbed Neera Tanden to be his director of the Office of Budget and Management. Tanden is a longtime Democratic loyalist, so it’s not surprising she was picked. But now everyone is enthused to have a person working adjacent to the White House they can goad into a Twitter fight at 4am. For Tanden never logs off.

Though the tweets are often deleted in the morning, Tanden has often engaged in back-and-forths online when it seems like she might have something better to do.

An infamous exchange occurred in 2019 when Tanden got in a spat with Southern Poverty Law Center researcher, who was a graduate student at the time, Hannah Gais, who told Tanden off at nearly 2am. Even the New York Times declared her personality on the platform as “bellicose.”

While Tanden is facing criticism from Republicans for being part of the liberal establishment of the Democratic party, that assessment is conjured out of the ether, ignorable nonsense, given that the left of the party genuinely dislikes her from her time as a Clinton surrogate against Sen. Bernie Sanders (I-Vt.) in 2016. And given her penchant for tweeting away late-night without regard to how it will look in the morning, she’s been dubbed online as a “Xanax and wine” mom, the kind of youthful suburban woman in Lululemons who after her Pure Barre class enjoys anti-anxiety meds and a glass of lightly chilled Chablis.

There’s no proof of Tanden drinking (save for one wine picture on Twitter) or using prescription medication, and even some who have used the meme have said it’s more of metaphor than an accusation.

Still, tweets that Tanden’s sent in the past four years—especially those ones after hours—often earn that kind of reply. And when she was nominated, the leftist online discourse did not forget it.

Tanden for her part routinely deletes the tweets she sends after hours.

So while many are critiquing the choice, there is one upside. For those afraid that the news cycle will slow down after Trump leaves office, welcome to “OMB: After Hours.”