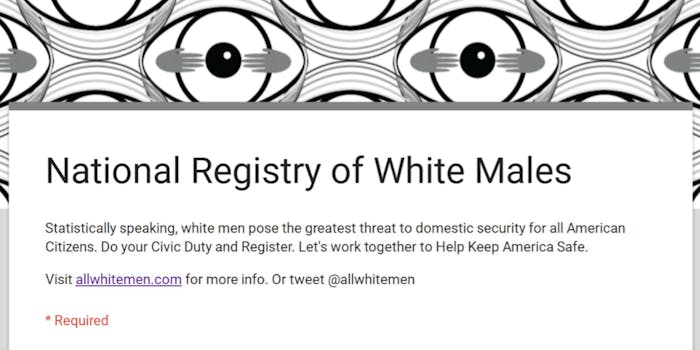 The National Registry of White Males is here to protect America

Donald Trump, you're up first.

In the aftermath of the election of Donald Trump, plenty of Americans are feeling a lot of anxiety, thanks to the litany of draconian policies and proposals he’s put forward. Whether you’re talking about America’s immigrant, Muslim, or LGBT populations, the concerns and fears are real and palpable.

And one of the most harrowing proposals is now getting aired publicly, with just two months left until the Trump administration begins: forcing all Muslims living in the United States to be entered into a registry, about as bleak and dystopian a violation of the Constitutional freedom of religion as one could imagine. One Trump backer on cable news, in fact, cited Japanese internment during World War II as a precedent.

Here’s a compelling response, though, one that sends both a clever and important political message—the National Registry of White Males, a project that helps peel away some of the naked awfulness of it all. In short, while members of racial majorities often have an easy time lumping all the racial minorities around them into big, monolithic groups, they don’t always take it so well when that worldview is turned around on them.

If You Know A White Male, Register Them On This National Registry: https://t.co/wU0Y6gyzOg pic.twitter.com/tjXdWf9ibu

The registry (which can be viewed at AllWhiteMen.com, or via this Google document) is the brainchild of Candace Thompson, who explained the reasoning behind the project in a Facebook post earlier this week.

“According to a Newsweek article from earlier this year, Right Wing Extremists pose a greater threat to National security than ISIS(6), and in the past week alone The Southern Poverty Law Center has registered over 400 reports of hate crimes enacted in the name of the nationalist, racist, and sexist campaign rhetoric espoused by Donald J Trump(7). Every day, as shocking staff appointments and Muslim registry plans start to emerge from the president-elect’s transition team(8,9), one thing has become increasingly clear: the safety of American citizens—all American citizens—is in danger.”

If you’re interested in adding your name to the National Registry of White Males, or if you think there’s a white male in your life who hasn‘t registered—and honestly, if they haven’t, what are they hiding?—then you’ll want to take a look.

Lest anyone think the Republican establishment might step in to thwart the idea of a Muslim registry, it’s worth noting that future chief-of-staff Reince Priebus refused to rule out a registry Sunday, although he insists it won’t be based on religion. In short, the establishment hasn’t seemed very interested in trying to reign in its inflammatory new commander-in-chief so far, and it’s hard to imagine they’re going to start now.

Rest assured, this new white male registry wouldn’t be necessary if white males weren’t proving to be such a problem for American safety and security. So, come on and do your civic duty. It’s really the only responsible thing to do.