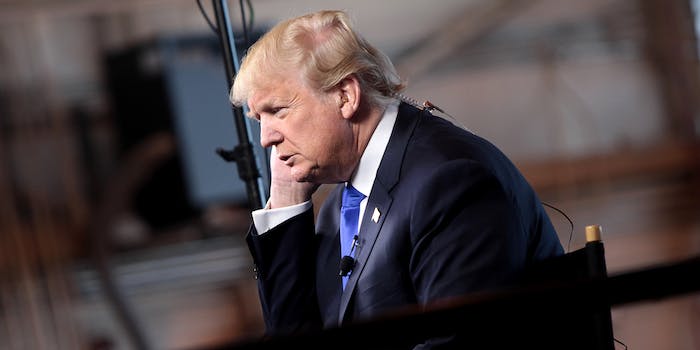 This can't be great news for the Republican party.

If you thought the Republican establishment was finally getting used to the idea that Donald Trump could become the party’s nominee for president, the National Review would like to set the record straight.

That’s because the conservative magazine, according to CNN, will release on Friday an edition in which it declares that Trump is a threat to conservatism and that it officially opposes his candidacy. Included in the edition will be 22 conservative voices who have written essays to describe why Trump is a bad idea for the party.

As of Thursday night, you also can read it online.

“Donald Trump is a menace to American conservatism who would take the work of generations and trample it underfoot on behalf of a populism as heedless and crude as The Donald himself,” the magazine said in an editorial, via the New York Times.

But not everybody thinks that way. Some reportedly would rather have Trump go forth as the nominee instead of Ted Cruz, who very well could win the Iowa caucus later this month even though he’s maligned by much, if not most, of the party establishment.

“If it came down to Trump or Cruz, there is no question I’d vote for Trump,” 2008 presidential candidate Rudolph W. Giuliani said recently, via the Washington Post. “As a party, we’d have a better chance of winning with him, and I think a lot of Republicans look at it that way.”

Clearly, that’s not an opinion shared by Rich Lowry, the editor of the National Review who reportedly has spent the last few weeks putting together the 22 conservative thinkers in order to make a big stand against Trump.

“This is the time to mobilize,” Lowry said, via Politico. “The establishment is AWOL, or even worse, so it’s up to people who really believe in these ideas and principles, for whom they’re not just talking points or positions of convenience, to set out the marker.”

It’s also interesting that it’s the National Review making such big noise, because its founder is the late William F. Buckley, who Trump used in the last Republican debate to dispel Cruz’s notion that “New York values” was a negative.

Said Trump at the time: “Conservatives actually do come out of Manhattan, including William F. Buckley and others, just so you understand.”