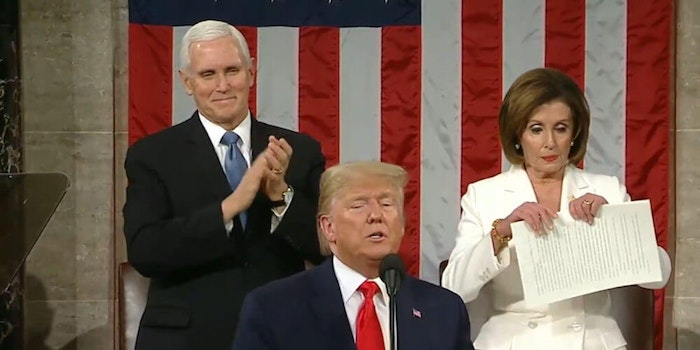 Trump and Pelosi had a few moments on Tuesday night.

House Speaker Nancy Pelosi tore up a copy of President Donald Trump’s State of the Union speech just as he finished delivering it on Tuesday night.

Pelosi, who as the head of the House of Representatives oversaw the lower chamber’s articles of impeachment against Trump several weeks ago, had a previous rift with the president on Tuesday night.

At the beginning of the speech, it appeared as if Trump rebuffed an offer by Pelosi for a handshake after he handed her a copy of his address.

After ripping up the speech, Pelosi placed the shredded copy into a pile on the dais next to her.

Pelosi said she ripped up the speech because it was “a courteous thing to do considering the alternatives,” according to Fox News.

Speaker Nancy Pelosi on why she ripped up President Trump’s speech: “Because it was the courteous thing to do considering the alternatives.” pic.twitter.com/nYTjAZAwGo

The House speaker’s moment punctuating the State of the Union obviously got some attention on social media.

Nancy Pelosi ripping up her copy of Donald Trump's #SOTU speech was obviously the best part of the speech. pic.twitter.com/ZxUxOErcd2

Glad I didn't miss this. @SpeakerPelosi towers above this felonious blowhard and sees him and his words for the rubbish they are. https://t.co/WonxiKlJbY

We are all Nancy Pelosi #SOTU2020 pic.twitter.com/sz7v1zE62j

Nancy Pelosi shows total disrespect for the office of President. She is an embarrassment to the office of Speaker she holds. pic.twitter.com/CIudnpzP7D

Pelosi has disgraced herself, her office, and the House yet again. Her antics throughout the speech, and her drama thereafter, further expose her as a classless political hack.

Trump steered relatively clear of impeachment in his speech.