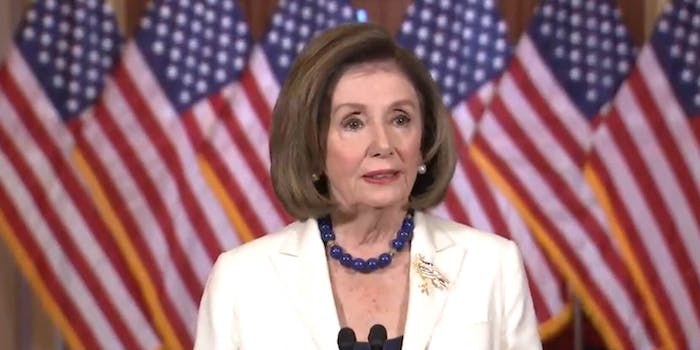 Pelosi calls for House to proceed with impeachment against Trump

Pelosi's request comes after several hearings and a detailed report being released.

“The president has engaged in an abuse of power, undermining our national security, and jeopardizing the integrity of our elections. His actions are in defiance of the vision of our founders and the oath of office that he takes to preserve, protect, and defend the Constitution of the United States,” Pelosi said, later adding: “Sadly, but with confidence and humility, with allegiance to our founders, and a heart full of love for America, today I am asking our chairman to proceed with articles of impeachment.”

BREAKING: House Speaker Nancy Pelosi: "Today, I am asking our chairman to proceed with articles of impeachment." https://t.co/mxQf9G9nGM pic.twitter.com/oYcDE6wSnj

The announcement from Pelosi comes after weeks of hearings held in the House of Representatives and a detailed report put together by the House Intelligence Committee that was released earlier this week.

It’s likely that Trump will eventually be impeached by the House; however, it remains a long shot that the Senate will reach a two-thirds majority required to convict the president.

White House Press Secretary Stephanie Grisham reacted to the announcement on Twitter, saying that they looked forward to a “fair trial in the Senate.”

“[email protected] & the Democrats should be ashamed. @realDonaldTrump has done nothing but lead our country – resulting in a booming economy, more jobs & a stronger military, to name just a few of his major accomplishments. We look forward to a fair trial in the Senate,” Grisham tweeted shortly after Pelosi spoke.

Earlier on Thursday, Trump tweeted that if the House was to impeach him, they should “do it now, fast,” adding that they had “no impeachment case” and that he wanted a “fair trial in the Senate.”