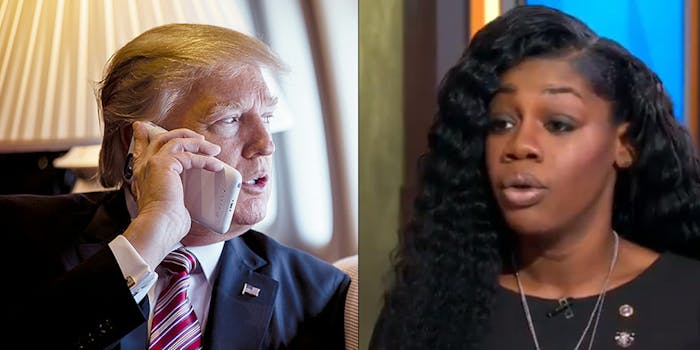 Rep. Frederica Wilson said Trump told Myeshia Johnson that her husband "knew what he signed up for."

The widow of Sgt. La David T. Johnson said the Rep. Frederica Wilson (D-Fla.)  recollection of President Donald Trump’s phone call to her saying that her husband “knew what he signed up for” was “100 percent correct” despite the claims of the president and several White House officials.

Myeshia Johnson, the widow of Sgt. Johnson, who was killed in Niger earlier this month, backed up the claims from Wilson that Trump told her during a phone call that her husband “knew what he signed up for.”

Speaking on Good Morning America (GMA) on Monday morning, Johnson went into detail about Trump’s call to her–which occurred when she was traveling to meet the body of her late husband at an airport in south Florida.

During the interview, Johnson said she has not been told many of the circumstances around her husband’s death and was not be allowed to see his body.

“Whatever Ms. Wilson said was not fabricated. What she said was 100 percent correct,” Johnson said, adding that several people heard the phone conversation. “The phone was on speakerphone. Why would we fabricated something like that?”

She added that officials repeatedly prevented her from seeing her husband.

“I need to see him so I know it’s my husband,” she said. “They won’t show me a finger, a hand; I know my husband’s body from head-to-toe and they won’t let me see anything.”

Johnson said she cried after the call because Trump “stumbled” trying to remember her husband’s name. Johnson said she “just listened” to Trump’s call and didn’t say anything to him.

When GMA host George Stephanopoulos asked Johnson if she had anything to say to Trump, she declined.

"Whatever [@RepWilson] said was not fabricated. What she said was 100% correct." – widow of Sgt. La David Johnson on Pres. Trump's call pic.twitter.com/fOAmT7c0Bk

Trump has repeatedly railed against Rep. Wilson on Twitter in recent days, calling her “wacky.”

On Monday morning, the president appeared to also disagree with Johnson’s own recollection of the phone call, persisting that his conversation was “respectful.”

“I had a very respectful conversation with the widow of Sgt. La David Johnson, and spoke his name from beginning, without hesitation!” Trump wrote on Twitter shortly after the GMA interview aired.

I had a very respectful conversation with the widow of Sgt. La David Johnson, and spoke his name from beginning, without hesitation!

Wilson said last week that she overheard Trump’s call on speakerphone, where she recalled Trump saying: “Well, I guess he knew what he signed up for. But I guess it still hurt.”

Since then, Trump, and Chief of Staff John Kelly, and White House Press Secretary Sarah Huckabee Sanders have all tried to discredit Wilson’s recollection of the call.

During a press briefing last week, Sanders said Wilson was “politicizing” the call by bringing up what Trump said, adding that she thought Wilson’s actions were “appalling and disgusting.”

You can watch all of Johnson’s interview on GMA here.