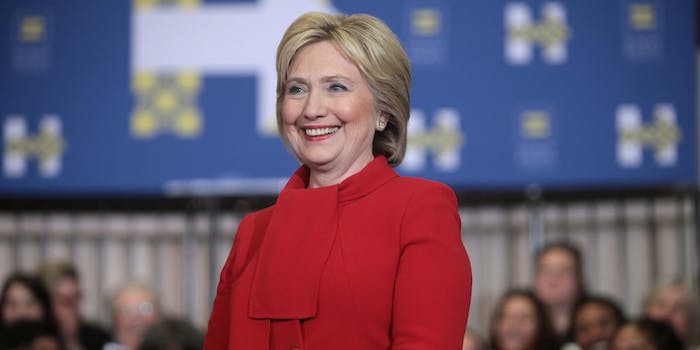 It wasn't whether she'd win, but by how much.

The win come as little surprise for the Clinton camp, who led by as much as 54 points in recent Mississippi polls. The question lately wasn’t if Clinton would win, but by how much would she extend her delegate lead.

Clinton secured 29 of the 36 delegates available in Mississippi, while Sanders took four.

In a major upset, however, Clinton narrowly lost Michigan to Sanders, where the former secretary of state led by more than 21 points in the  lead-up to Tuesday’s vote.

Despite the Michigan defeat, Clinton still took home the bulk of Tuesday’s delegates, pushing her total delegate count (1,221) over 50 percent of the 2,383 delegates she’ll need to claim the Democratic presidential nomination.

The Democratic primaries next big day is March 15 when Florida, Illinois, Missouri, North Carolina, and Ohio offer 792 delegates up for grabs. Clinton holds wide double-digit leads in polls from each state.

Correction: Sanders is running on the Democratic 2016 ticket, but he is an independent senator.