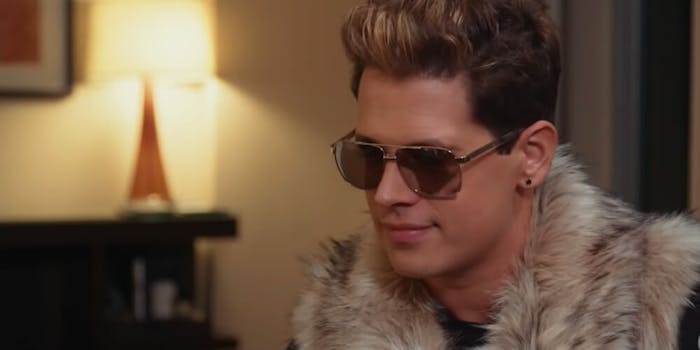 Milo Yiannopoulos threatens to crash furry convention he is barred from

Alt-right figure Milo Yiannopoulos was banned from a popular furry convention on Monday after announcing he was planning to attend, presumably as a snow leopard–a fursona he said he recently adopted.

After hearing of Yiannopoulos’ registration, convention-goers expressed their concern, prompting Midwest FurFest to release an initial statement on Twitter Sunday. It announced that it was investigating the matter because attendees’ “safety is of the utmost importance and is not being ignored.”

“Mr. Yiannopoulos’ attendance at the convention may lead to an inability to provide a safe and welcoming experience for convention participants,” Midwest FurFest wrote in a statement on Monday.

Now, Yiannopoulos is threatening to crash the convention, and participants are once again concerned. Yiannopoulos released his emails with the Midwest FurFest press team and the Midwest Furry Fandom board on Telegram, a new Neo-Nazi hub–and not by the neo-Nazis’ choice, but because it’s the only platform that hasn’t taken steps to deplatform them.

In one of the emails, Yiannopoulos said he booked two hotel rooms, under two different names–both of which are not his–which he said granted him “unfettered access to hotel facilities.” He then gave the Midwest FurFest 24 hours “to act” and “rescue this relationship.”

In a separate, yet equally threatening, email, Yiannopoulos wrote that he was “coming anyway” and bringing friends with him. “Get ready,” he wrote.

Here's Milo's response to MFF. He insists he's attending anyway, having gamed the room lottery to get two con hotel rooms. I've got a feeling the hotel will deal with implied threats. pic.twitter.com/GZqzGXHo3I