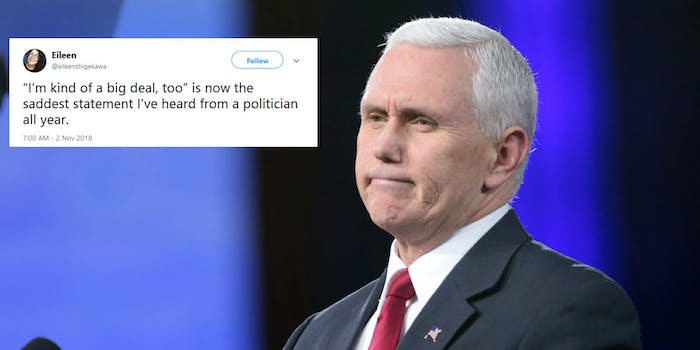 Mike Pence compares himself to Oprah while stumping in Georgia

Vice President Mike Pence compared his stardom to comedian Will Ferrell and Oprah Winfrey on Thursday when campaigning in Georgia for gubernatorial candidate Brian Kemp.

The vice president made the remarks in the wake of both Oprah and Ferrell trying to get out the vote for Kemp’s opponent Democrat Stacey Abrams.

“I heard Oprah is in town today. I heard Will Ferrell was going door-to-door the other day. I’d like to remind Stacey and Oprah and Will Ferrell—I’m kind of a big deal, too,” Pence said. “And I got a message for all of Stacey Abrams’ liberal Hollywood friends: this ain’t Hollywood. This is Georgia.”

.@VP Mike Pence: "I'd like to remind Stacey and Oprah and Will Ferrell, I'm kind of a big deal, too." https://t.co/akjDbzrCxz pic.twitter.com/gdjaIx5btP

Pence stumping for Kemp, a Republican who was recently criticized for posing for a picture with an anti-Muslim extremist, comes as the race to become Georgia’s next governor appears to be very close.

Real Clear Politics, which tracks several polls to give an average idea of where a race is standing, shows Kemp with just a one-point lead ahead of next week’s vote. There have been reports of problems with Georgia’s voting machines and the NAACP filed complaints with the state’s Board of Elections after people alleged their votes for Abrams switched to a vote for Kemp, USA Today reported.

Pence’s assertion that he was “kind of a big deal” was talking about Oprah and Ferrell was quickly dunked on by people on Twitter.

Comparing yourself to Oprah is a great way to draw the ire of the internet.