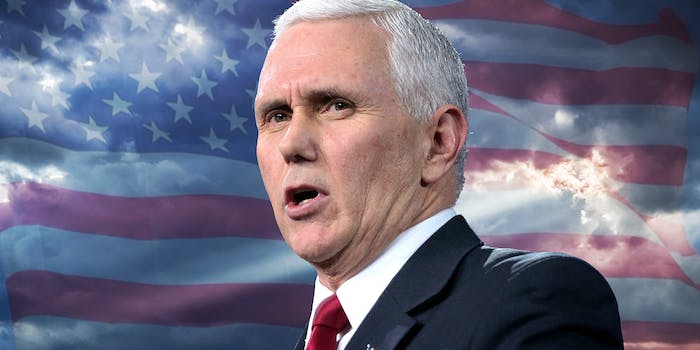 Would Pence side with God or America if Trump’s Space Force invaded Heaven?

It's a fair question.

In his address, Pence said that Space Force would be a (space) force for peace.

“America will always seek peace, in space as on the Earth,” Pence said. “But history proves that peace only comes through strength. And in the realm of outer space, the United States Space Force will be that strength.”

America will always seek peace, in space as on the Earth. But history proves that peace only comes through strength. And in the realm of outer space, the United States #SpaceForce will be that strength. pic.twitter.com/I39E00oK60

But mere moments after Pence’s speech, the Trump 2020 campaign send out an email blast soliciting input on a logo for Space Force, one of which strongly implied we’d be invading Mars.

And if American hegemony and warmongering on an earthly scale is any indicator, America will not always seek peace, but rather interstellar dominance.

We will try to make the heavens our own—a manifest destiny of the stars—and that raises an interesting question: If Trump ordered his Space Force to invade Heaven, would Mike Pence side with God or the U.S.?

It’s pretty much a certainty that Pence, a creationist, believes in the concept of heaven. His faith has been well documented, and he’s implied his spot at Trump’s right hand involved divine intervention from God above.

And while no one knows if heaven exists, or where it is, a common assumption of heaven is that it is somewhere out there, “out there” possibly being the unexplored reaches of outer space. God and heaven are routinely referred to as celestial bodies.

So… if Trump started tweeting at God, threatening to laser down the Pearly Gates, who would the vice president side with?

Pence, for his part, has quietly gone along with the entirety of the president’s agenda. He’s never spoken out against any of the administration’s policies, and even willfully participated in stunts orchestrated by Trump, traveling to the DMZ and walking out of an NFL game. Could you see him donning a bomber jacket and staring down St. Peter through his binoculars?

Especially when it comes to matters of war and state, vice presidents have rarely disagreed with presidents. You’d have to go back to Herbert Humphrey in 1965 telling President Lyndon Johnson to get out of Vietnam to find such disobedience. It would be the kind of bold, iconoclastic behavior Pence has not shown in his 18 months in office.

But this is heaven. God’s home. Pence most assuredly loves and respects God. And though some disagree with his faith, he tries to live what he believes is a pious life. While nothing in the Bible explicitly outlaws invading heaven, you’d think that would be the kind of thing that would make God mad.

That’s probably something Pence would be loath to do. Enough so to break with Trump? That would make Trump pretty mad.

Unfortunately, we may never know who he’ll side with.

“Is this a serious question?” Pence’s press secretary responded when reached. They did not respond to any follow-up inquiries on the matter.