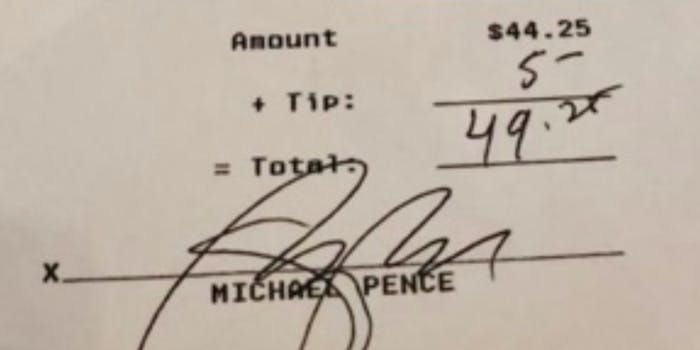 A Twitter user is claiming to have a receipt that proves Vice President Mike Pence is a terrible tipper.

In a tweet on Tuesday, which has garnered over 10,000 shares, Sachin Chheda alleged that Pence had only tipped a few dollars during a recent outing.

“Here’s the character of these people. A friend’s friend works at a restaurant that served @Mike_Pence at lunch today,” Chheda said.” He tipped $5 on $45 bill. This is who these people are. Remember that, always.”

While the claim is unverified, Twitter users weighed in and debated over the vice president’s alleged actions.

Some sensationally argued that the purported tip was indicative of the political class and their inhumane nature.

“They want the poor to struggle,” @JessicaGirardo argued. “They will eat you when times get tough mark my words.”

Others viewed the alleged incident in light of recent debate among politicians in the nation’s capital over whether the public deserves economic aid during the coronavirus pandemic.

“The same motherfuckers who expect us to be sniveling around with gratitude for $600 after almost a whole year of this bullshit,” @rsjkAND1 said.

Pence’s alleged meal was also criticized, with many arguing that the claims must be real because of the bizarre order.

But several users defended Pence, asserting that the tip was more than enough.

“Hey I’m no fan of Mike Pence, but 12.5% (always tip on the pre-tax subtotal) doesn’t seem unreasonable to me,” @uh_who_are_you argued. “I don’t subscribe to the runaway 20%+ gratuities so commonly found today, even if split with the back-end staff.”

Pence is currently on a holiday vacation in the Colorado town of Vail. Local reports claim that Pence took part in skiing lessons in nearby Beaver Creek as well.

Beaver Creek is home to a restaurant known as Coyote Cafe, the name of the establishment listed on the receipt.