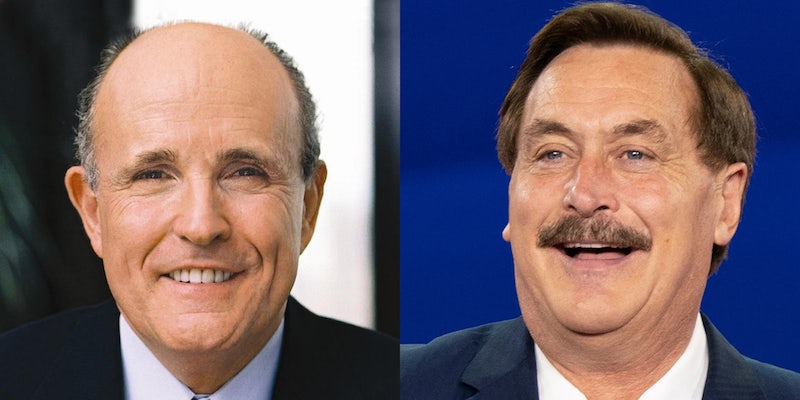 'Rudy Giuliani went from the guy who got NYC through the aftermath of 9/11 to a My Pillow influencer.'

Prominent right-wing figures are attempting to cash in on Mike Lindell’s recent legal woes by promoting the sale of his pillows.

Lindell, the CEO of My Pillow and a major supporter of the false claim that the 2020 election was stolen from former President Donald Trump, alleged on Tuesday that his phone had been seized by the FBI.

Speaking with CNN, Lindell claimed that the FBI had questioned him over Tina Peters, the Mesa County clerk who was charged in Colorado in connection with the unauthorized access of voting machines. The FBI later confirmed in a statement that it had executed a search warrant outside of the same Hardee’s restaurant that Lindell had been present at on Tuesday.

The incident was immediately seen by conservatives not only as a witch hunt against Trump supporters, but as a way to generate quick cash.

In response to the phone seizure, high-profile conservatives such as former New York City mayor and Trump lawyer Rudy Giuliani began urging their followers to buy Lindell’s pillows: But not before fans used their personalized promo codes, which traditionally give people a percentage of sales.

In a tweet shared more than 4,300 times, Giuliani promoted an image asking users to use the promo code “RUDY.”

Giuliani was widely criticized as a result, with users arguing that he had fallen from a respected political figure in the wake of the 9/11 attacks to a disgraced pillow promoter.

“Rudy Giuliani went from the guy who got NYC through the aftermath of 9/11 to a My Pillow influencer,” Twitter user @LibertyAnders wrote.

Giuliani was far from the only person sharing a promo code. Conspiracy theorist Jack Posobiec also began begging his followers to “fight BACK” against the FBI by purchasing a pillow as well.

Posobiec has shared his promo code at least 25 times on Twitter since the phone seizure on Tuesday, according to an analysis by the Daily Dot.

Conservative commentator Dinesh D’Souza, who recently had to recall the book version of his widely debunked stolen election movie 2,000 Mules, was also quick to share his personal promo code.

“The FBI has seized Mike Lindell’s phone! For what?” D’Souza asked. “Let’s show these thugs with badges what we think by supporting Mike all the way and buying his products. Discounts of up to 66% when you go to http://mypillow.com and use promo code DSOUZA.”

Many other users such as the conservative duo Diamond and Silk as well as the right-wing media outlet the Post Millenial tweeted out their promo codes as well.

Numerous images also appeared to be identical in format. One conservative promoter on Twitter claimed that the graphics had been provided by “Mike and his team.”

The Daily Dot reached out to My Pillow to ask about the alleged campaign and whether an affiliate program was paying the conservative figures but did not receive a reply by press time.