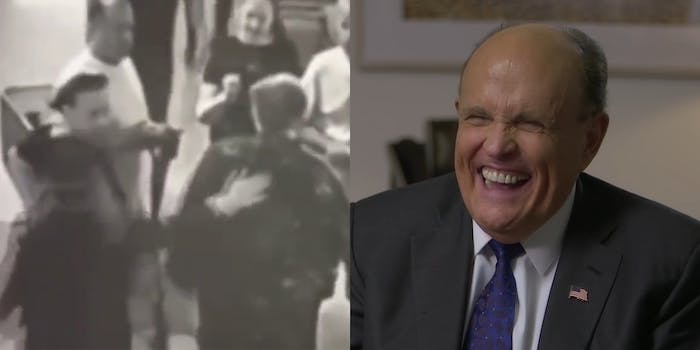 ‘Tapped in passing’: Rudy Giuliani mocked for assault theatrics after video shows a ‘pat on the back’

'Rudy Giuliani farting COVID on Jenna Ellis was more of an assault than the pat on the back he got today.'

Over the weekend, police arrested a Staten Island grocery worker and charged him with assaulting Rudy Giuliani by striking him on the back. Giuliani described the alleged assault as feeling like he’d been “shot.” “Lucky I’m a 78-year-old who’s in pretty good shape, because if I wasn’t I’d have hit the ground and probably cracked my skull,” he said.

Coverage of the alleged assault breathlessly described it as a “slap attack,” repeated Giuliani’s claim that he nearly fell after being struck, and quoted his son saying, “My dad is badass.”

Then the video came out. Now people are accusing Giuliani of “lying,” or at least blowing the incident way out of proportion. Many describe the alleged blow as more of a casual pat than an attack.

The video shows a man walking up behind Giuliani in the store and then touching his back with an open hand. Giuliani looks surprised, but doesn’t stumble or otherwise seem physically affected by the contact. According to the New York Times, police report that the man said, “What’s up, scumbag?”

Giuliani claims that the man also blamed him for the United States Supreme Court overturning Roe v. Wade. He told the Times that the man said, “You’re going to kill women, you’re going to kill women,” presumably referring to women dying from illegal abortions or potentially deadly medical conditions such as ectopic pregnancies in states where abortion is now or will be outlawed.

The video soured much sympathy people originally had for Giuliani.

The man accused of hitting Giuliani has been charged with second-degree assault.

Several criticized the media for taking Giuliani entirely at his word. “LOL local news is really hook line and sinker for Rudes on this pat on the back,” @joshtpm tweeted.

Some have accused outlets of quietly updating their stories after seeing the video.

“This appears to be the original version of the story. It entirely relies on the account of Rudy and his son. Good the Post updated it after the video came out,” tweeted CNN’s Andrew Kaczynski, referring to the New York Post’s initial coverage. “Not a good luck to not tell their audience the story significantly changed.”

Giuliani is now being widely mocked.

“Barely a tap on the shoulder. Just another Giuliani bullshit story,” tweeted @Douglasreber.

“Rudy Giuliani farting COVID on Jenna Ellis was more of an assault than the pat on the back he got today,” wrote @antifaoperative.

On Monday, Giuliani continued insisting that he was the victim of a violent and vicious assault.

“I got hit on the back as if a boulder hit me. It knocked me forward a step or two. It hurt tremendously,” he said.