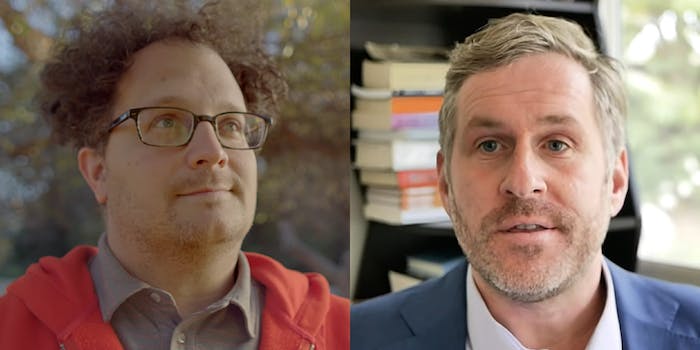 The feud between Mike Cernovich and Vic Berger, explained

There's a battle going on between Mike Cernovich, Twitter, and Vic Berger.

For years, Berger has used his editing skills to poke fun at “Weird Mike” Cernovich, whose claims to fame were promoting the false #Pizzagate story and being a rape apologist. During the 2016 election, Cernovich pivoted to politics, but has since re-rebranded as a mindset entrepreneur.

Berger has also repeatedly tried to get Cernovich banned from social media.

Some other highlights of Berger’s editing work include the 2016 classic “Jeb is a mess” video, a montage of Steve Harvey having an existential crisis on Family Feud, which has more than three million views on YouTube, and deeply disturbing images that you will never be able to unsee, like this one of Tim Pool sans beanie.

Recently, Berger has tried a new tactic lifted directly from the playbook of his nemesis: accusing Cernovich of being inappropriate with children. In a tweet that included images of Cernovich photoshopped as a clown, Berger wrote that Cernovich dresses up as a clown to “hide his identity and hang around kids,” and that a “judge ordered him to keep away from children.”

Berger pointed out that Cernovich accused him of being a child molester on Twitter in 2016. Indeed, accusing people of being involved with pedophilia is kind of his thing.

In a comment to the Dot, Berger claimed he wasn’t accusing Cernovich of being inappropriate with children.

For his part, Cernovich is not amused. In several tweets, he has said that he considers Berger’s tweets and other conduct to be tantamount to stalking, and claims that his life, and those of his family, are being threatened. (Berger did not respond to request for comment.)

Specifically, Cernovich believes that his life is being threatened in part because police might shoot him if they show up to investigate the allegations that he mistreated children.

Jared tried getting @PrisonPlanet banned but pals around with Vic Berger, an actual stalker who targets women and newborn babies. pic.twitter.com/LgVLbu8apZ

Cernovich also alleges that he has made an official complaint about Berger to the police. Yesterday, he tweeted, “This is the criminal complaint I swore out under oath against Vic Berger. I redacted phone numbers. As you can see, this is as bad as it gets.” The tweet included pictures of an “affidavit,” which was not notarized and appeared to just be something he typed up and signed.

This is the criminal complaint I swore out under oath against Vic Berger.

As you can see, this is as bad as it gets. pic.twitter.com/5putEXQd09

In recent days, he has gone on to claim that Berger maintains bot accounts on Twitter, which he knows because, he says, they’re all linked to the same phone number.

Berger is so blinded by rage that he used his personal phone number for his alias accounts.

All Twitter has to do internally is run a search of Berger’s phone number.
https://t.co/ri0nJIE5Vw

Cernovich did not list any of these “bot accounts,” nor did he respond to a request from The Daily Dot to name some of the accounts. It is technically possible to search for people on Twitter using their phone number, though you can also disable the setting that enables such.

As per usual whenever a far-right troll gets their feelings hurt on the internet, Cernovich has enlisted friends in the fringe media to wag their fingers at those they believe are in cahoots with the social media companies. On the case is Brietbart reporter Allum Bokhari, who wrote an article accusing Facebook and Twitter of refusing to ban “far left troll” Berger who “smeared” Cernovich and his family.

Bokhari also repeated the allegation that, by tagging the FBI in the clown tweet, Berger was putting Cernovich’s life and safety at risk. In the article, Cernovich is quoted as saying, “A verified twitter user made fake videos of my wife and daughter and attempted to have us SWATTED.”

It’s a very intriguing turn of events for a far-right troll who has spent years spreading lies about liberals—like when he and Alex Jones spitballed on an episode of InfoWars about Joe Biden being a pedophile based on him rubbing his daughter’s hair—to get bent out of shape when the tables are turned. Consider that a man who described his own tactics as “[using] trolling strategies to build my brand” to the New Yorker is now complaining about getting trolled.

There’s no way to know where this battle is going from here. But one thing is certain: we are here for it. Every step of the way.