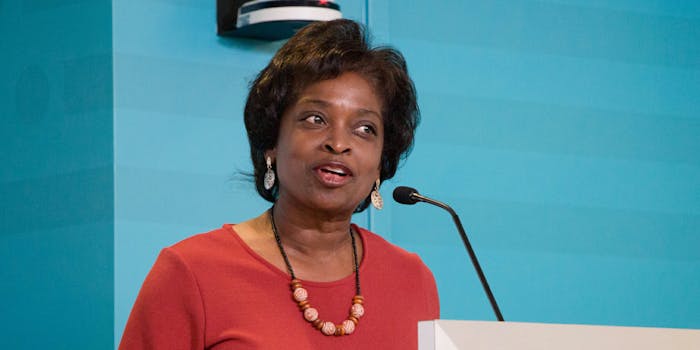 Clyburn voted against the repeal of net neutrality rules.

Mignon Clyburn, a Federal Communications Commission (FCC) commissioner and a passionate voice in the defense of net neutrality, is stepping down from the agency, she announced on Tuesday.

Clyburn, one of five commissioners at the FCC, was appointed by former President Barack Obama. She is the daughter of Rep. Jim Clyburn (D-S.C.).

“I’ve done all I know to do. And it’s time for me to serve in another way,” she said at an FCC meeting on Tuesday, according to Politico.

During the contentious vote, Clyburn said she was “outraged” over the repeal of the rules by Republicans on the FCC and Chairman Ajit Pai. She said the agency was “handing the keys” of the internet to a “handful” of corporations.

During her tenure, Clyburn was also vocal about increasing female and minority ownership of radio stations and broadcast television.

Sen. Edward Markey (D-Mass.), who has spearheaded an effort in Congress to overturn the FCC’s net neutrality repeal, praised Clyburn’s time at the agency.

“Commissioner Clyburn has served the American people with integrity, distinction, and compassion during her nearly nine years at the Commission, and she will be deeply missed,” Markey said in a statement. “Mignon is a voice for the voiceless, always defending the most vulnerable in our society to ensure they are protected against the special interests. Her commitment to defending net neutrality, protecting the Lifeline program, lowering prison phone rates, and so many other critical consumer protection programs has benefited millions of American families. I thank her for her service, and I wish her the best of success in her next endeavor.”