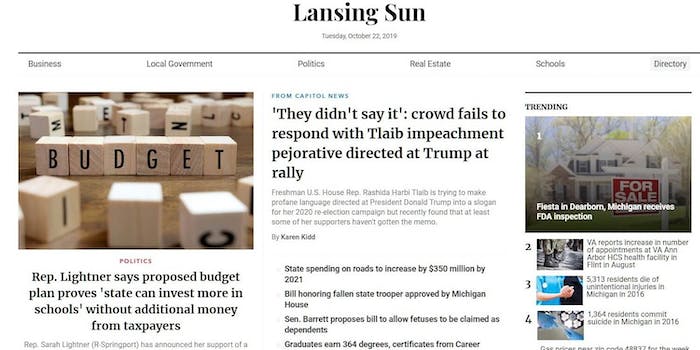 Researchers said the Michigan news websites appear to mimic a strategy used by the European far-right.

Researchers claim that a mysterious network of 40 near-identical conservative-leaning local Michigan websites—which appeared online in recent weeks—may be an attempt by political actors to manipulate voters with a fake news campaign strategy.

The local-sounding news outlets were first noticed by Matt Grossman, director of Michigan State University’s Institute for Public Policy and Social Research, and flagged by a real Michigan local newspaper the Lansing State Journal on Sunday in an article which profiled the dozens of websites styled as town papers with stark right-wing bias.

Websites titled the Grand Rapids Reporter, the Kalamazoo Times, and Waterford Today push identical articles about fuel prices and events but also hyperpartisan pro-President Donald Trump content and anti-Democrat pieces. Metric Media, a company founded in 2014, is listed as the organization behind the websites.

Metric Media’s chief executive is Bradley Cameron, who identifies himself as a private equity investment consultant for Silicon Valley companies and is a former senior advisor to a Republican House strategist.

As the story was picked up by mainstream media outlets, some researchers and journalists said that they had seen this kind of pattern before in the form of coordinated right-wing political propaganda and influence campaigns in Europe, targeting local communities.

fascinating. This is exactly what the European far-right did in Italy and Spain, created fake "local" websites with conspiratorial content. Now being brought to you in the US as well. https://t.co/y4XYFfgnxw

In Europe, according to researcher Anne Applebaum, far-right political movements—like Spain’s nationalist Vox party—used local-sounding media outlets to repackage their messages, which are then supported by a vast social media bot army. In doing so, the group paved the way for election success.

In a Twitter thread, Applebaum underlined just how easy it was for a framework like this to be set up and managed by a small team.

Remember, all of this is very cheap: One person can run several false/misleading websites, and fund it through internet advertising. And botnets can be created by any old ad agency.

While some claim the websites blur the line by presenting outright political messaging as locally produced and trusted journalism, Metric Media’s mission statement described the company’s philosophy as without political biases, being “objective” and “data-driven.”

According to Grossman, the absence of advertising on the sites and no paywalls indicates that its goal is influence and not profit or news dissemination

“It doesn’t look like a business enterprise,” Grossman told the New York Times. “News is struggling in general. It looks more like they’re trying to influence the political debate by targeting people who are already interested in that content.”

“I don’t know if fake but local-sounding news outlets makes things more credible,” he continued, “but they certainly seem to think so because they’ve gone to the effort to do that.”