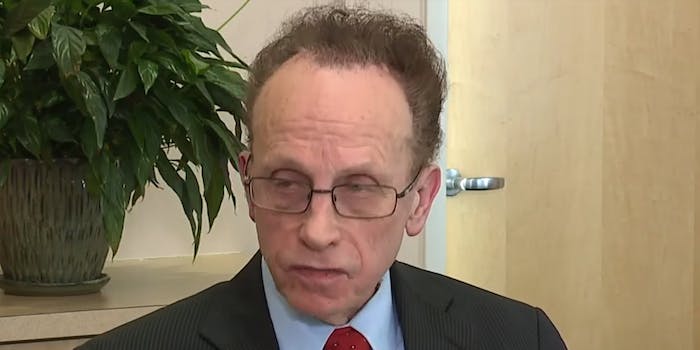 This is not the first time he’s used this defense.

A Michigan mayor is insisting that an audio recording of him using a homophobic slur isn’t real, but he has a history of calling such recordings “phony.”

The 76-year-old mayor of Warren, Jim Fouts, is playing defense after a local paper reported on an audio clip that appears to be of Fouts. A former city employee told Deadline Detroit that the tape was recorded in Fouts’ office, but Fouts says otherwise.

The best guess for the personal thing Fouts was referring to is his age. In 2011, Warren Weekly, among other local papers, investigated Fouts’ false claims he was 67, when he was, in fact, two years older. This is just one reason Fouts has a contentious relationship with local media, but another is the many recordings of him saying terrible things, which he always vehemently denies.

In recordings released over the past two years, Fouts, or someone who is remarkably good at sounding like Fouts, has been revealed to use discriminatory language towards all sorts of marginalized groups. In these recordings, he has compared Black people to chimpanzees, said developmentally disabled children should be euthanized or kept in cages, and even talked about wanting to violently attack political opponents and former staffers.

Foust has maintained that all of these are somehow faked by people who want to detract from his achievements. “I was a sent a copy of it, and it’s clearly more of the same,” he said to the Detroit Free Press of this latest tape. “It’s another phony, manipulated, manufactured, out-of-context—it’s just a phony tape.”