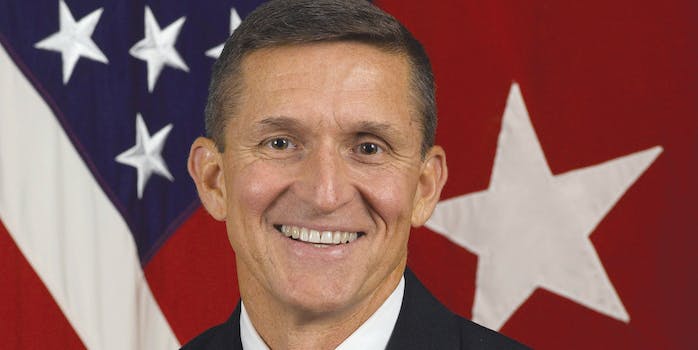 Flynn received $11,250 from the Russian Volga-Dnepr Airlines in August 2015, according to the documents, and $11,250 in October 2015 from Kaspersky Lab, Russia’s leading cybersecurity firm. Kaspersky said in a statement that Flynn was paid for speaking at a gala, and that payment was contractually required by a speaker’s bureau of which Flynn was a member.

Flynn also received $33,750 from RT News, a Kremlin-owned news company, for speaking in Moscow in December 2015, according to documents released by Rep. Elijah Cummings (D-Md.), the top Democrat on House Committee on Oversight and Government Reform.

In a letter addressed to the White House, the FBI, and Defense Secretary Jim Mattis, Cummings asked whether Flynn had disclosed the payments while being vetted for the national security position, which he held onto for less than a month.

In mid-February, Flynn was forced to resign as President Trump’s national security adviser after news broke that he’d mislead Vice President Mike Pence about his exchanges with Russian Ambassador Sergey Kislyak. Flynn claimed he had not discussed economic embargoes against Moscow imposed by the Obama White House—a falsehood repeated by the vice president multiple times on national TV.

“I cannot recall any time in our nation’s history,” wrote Cummings, “when the President selected as his National Security Advisor someone who violated the Constitution by accepting tens of thousands of dollars from an agent of a global adversary that attacked our democracy.”

Cummings added that he could not “recall a time when the president and his top advisers seemed so disinterested in the truth about that individual’s work on behalf of foreign nations—whether due to willful ignorance or knowing indifference.”

It was also revealed last week that Flynn was paid to lobby for Turkish interests in the months leading up to the election. The White House has denied that Trump knew Flynn was registered as a foreign agent while receiving classified briefings during the presidential campaign.