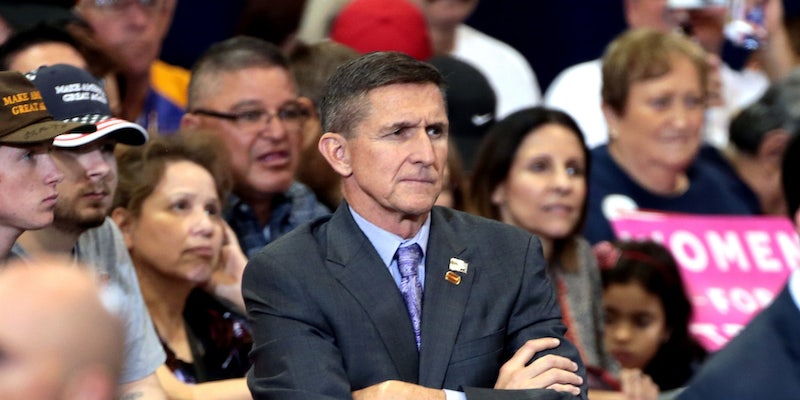 Michael Flynn is accused of discussing sanctions with Russian officials.

A stunning report in the Washington Post revealed late Thursday night that Michael Flynn, President Donald Trump’s national security adviser, discussed sanctions against Russia with that country’s ambassador prior to the inauguration.

The revelation—supported by a transcript of the call, according to the New York Times—has raised questions over whether Flynn violated federal law: namely, the Logan Act, which prohibits private citizens from negotiating with foreign governments on matters involving the U.S. government.

It is known that Flynn was in communication with the Russian diplomat, Sergey Kislyak, a few days after Christmas. But the Trump transition team portrayed the call at the time as a harmless chat to arrange a phone call between Trump and President Vladimir Putin of Russia.

The account relayed by federal officials means that one of two scenarios occurred: Either Flynn, a retired U.S. Army lieutenant general, lied to Vice President Mike Pence. Or Pence lied to the American people. During an interview on Face The Nation last month, Pence was adamant that Flynn “did not discuss anything having to do with the United States’ decision to expel diplomats or impose censure against Russia.”

A transcript of the call, however, reportedly reveals Flynn urged Russia not to react to planned sanctions authorized by President Barack Obama, who also expelled 35 Russian diplomatic operatives from the U.S., in response to Putin-directed cyberattacks that upended the Democratic Party last summer. Flynn reportedly notified Russia that the sanctions could easily be undone by the incoming administration.

The White House appeared to be circling its wagons around Pence on Friday. Administration officials told CNN that the vice president had no specific knowledge of the conversation, despite his prior insistence that the nature of the Flynn–Kislyak call was benign.

An aide to Flynn reportedly told the network that the former general had “no recollection of discussing sanctions” but added he “couldn’t be certain that the topic never came up.”